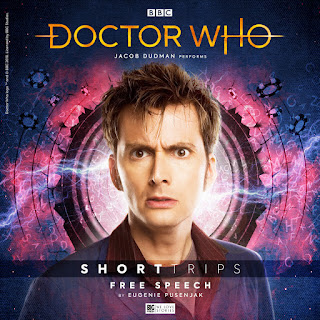 This year’s winner of the Paul Spragg Memorial Short Trips Writing Opportunity has been announced by Big Finish ...

Paul Spragg’s work behind-the-scenes on contracts, script distribution, proof-reading, cover layout, CD extra interviews, the website and so much more made him vital to Big Finish’s every day operations.

His sudden passing in 2015 led to the creation of an annual event in his memory in which budding writers are given a chance to showcase what they can do in the form of a Doctor Who – Short Trips submission.

Originally a book series, Doctor Who – Short Trips was relaunched in 2010 as an audiobook range. These short stories are written by some of Doctor Who’s most popular authors from the worlds of television, print, comics and audio, and read by a host of favourite Big Finish actors.

The winning entry now goes into production and will be released for free on 29 December 2020 (which would have been Paul Spragg’s birthday).

Head judge Nicholas Briggs said, “We picked Free Speech because it had language at its heart. I love that it is a story in which the words themselves feel so valuable and scarce. It conveys immediate urgency and engagement when you read it and when you hear it spoken. Eugenie’s precision and power as an author really leapt out at me.”

Alfie Shaw added, “Free Speech engages with the fundamentals of storytelling, and what happens when someone limits your ability to tell your story. It’s been great working with Eugenie, and a privilege to see this story develop from the exciting pitch that gripped us all during the judging process.”

And Emily Cook agreed, saying “Free Speech was one of the first entries I read and it stuck with me throughout the judging process. I suspected fairly early on that it might be the winner! It's a brilliantly Doctor Who-y idea - an intriguing and unique concept, well-pitched and well-executed. And the Doctor that Eugenie has chosen to write for is perfectly suited to this Short Trip. I'm really looking forward to hearing the finished product. Well done, Eugenie. Thank you for sharing your story with us!”

In 2021, the Doctor Who – Short Trips range will return in a new format as an audiobook anthology of six new stories, due for release in September. Big Finish listeners can now pre-order this download-only release, at the special price of £14.99, exclusively at www.bigfinish.com.
Image and info - Big Finish
Email ThisBlogThis!Share to TwitterShare to Facebook