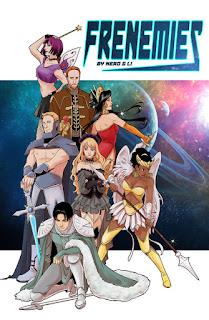 An innovative approach to Kickstarter, turning it into a storytelling medium, has proved successful for writer Monty Nero and artist Yishan Li...

Using Kickstarter as a platform to host original fiction has proven to be a new and exciting way for the comic's co-creators Monty Nero and artist Yishan Li to promote their current campaign for the Frenemies comics series.

“The trick is to make the campaign page part of a fictional universe, expanding the story from the comics with new characters and rewards,” says Nero. “Based on the feedback and comments on the site, people love it. We hit the target of £4000 in two days and are now on our fourth stretch goal.”

“As soon as you click on the link, you’re hit by our characters stuck in a distant universe hidden within Dark Matter. They need your help to rebuild The Eye of Stars, a time-portal, raising money via comics or art prints. Each day, a new cliff-hanger drops for backers with adventure, thrills, mysteries and new stretch rewards. So far, we’ve added a sci-fi novella, a cover upgrade, and art from Dylan Teague (2000ad, Delcourt).”

“I was worried people might be baffled by the fictional element,” admits Nero. “Honestly, some probably were, but you don't hear from them, do you. And it's worth the risk to do something new. We’ve got LGBTQ characters battling it out and a gender-fluid villain so our whole approach is to refresh pulp sci-fi with progressive ideas and laser-blasting thrills.”

“I’d expect to see other campaigns take this story-led approach in future. I hope so, it’s an absolute blast to make.”

Monty Nero (Marvel, Titan, Delcourt) and Yishan Li (Image/Dark Horse/DC) have solid experience on traditional comics for large publishers. How is this different for them?

“It’s hard work, no doubt. But you own it and the close connection to your readers keeps you going,” says Nero. “Every day we get to unleash a new adventure. I’ve tried to write inspiring, wondrous sci-fi with action scenes - all without boxing us into a corner or revealing too much from the comic. And yesterday we revealed our terrifying villain, The Marchioness/Marquis. 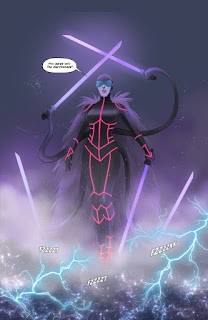 New readers can catch up with every instalment in the Updates section, and fresh rewards are announced on weekdays.” The campaign closes at 6pm GMT on 13th November.

Frenemies concerns seven LGBT+ and straight rivals searching for a mysterious Lost Planet that will destroy the solar system unless one of them can find it. “The aliens are so advanced their quantum technology looks to us like Dark Magic,” says Nero.” We focus on the alien technology transforming our protagonists with strange powers. Only one of them can reach The Lost Planet so do they cooperate or f*ck each other up? Or can they do both? Is your best friend your worst enemy when so much is at stake?”

The KS for Frenemies: The Lost Planet 1 and 2, which starts at 58 pages, can be found here https://www.kickstarter.com/projects/f02/frenemies-the-lost-planet-1-and-2-explosive-sci-fi-fantasy. More info on the series here https://montynero.com/frenemies/