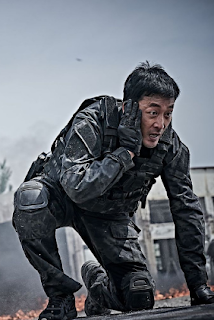 
The South Korean film industry is known for crafting quiet, poignant dramas about family and society, but give the Koreans any genre and they’re usually guaranteed to step it up a notch.

In the case of Ashfall the genre is the ‘disaster movie’. The South Korean film industry has had several previous disaster flicks - 2009’s Haeundae saw a tsunami destroy Busan, 2016’s Pandora imagined a Fukushima-like nuclear catastrophe and 2019’s Exit depicted a toxic gas cloud engulfing Seoul. However, none of these movies were on such an epic scale as Ashfall (a.k.a. Baekdusan). Directors Byung-seo Kim and Hae-jun Lee have assembled a formidable cast to save the country from a volcanic Armageddon.

The film opens as the world watches news reports covering the denuclearisation of North Korea, but within the first few minutes we are treated to a nail-biting action scene as a massive earthquake shakes the Korean peninsula. Mt. Baekdu, the volcano straddling the border between North Korea and China, erupts, and cities are collapsing around their panicking populations.

As ash fills the skies, scientists calculate that Mt. Baekdu’s eruptions will increase in severity and ultimately destroy half of the Korean peninsula. The eruption is an event which Korean-American geologist Robert Kang (Ma Dong-seok, in a role miles away from his burly-tough-guy image) has been predicting for several years. He is just about to leave Korea and return to the US when he is detained by the South Korean President’s secretary Jeon Yoo-kyung (Jeon Hye-jin) to advise and assist the government.

Kang suggests that their only option is to detonate a nuclear warhead in one of the conveniently placed mines around Baekdu to release the volcano’s building pressure and so save the peninsula. But there is a small problem - Baekdu is on the far side of North Korea along the Chinese border, making intervention tricky. Also, South Korea doesn’t have any nuclear weapons, but, again conveniently, North Korea has their remaining nuclear warheads stored in a secret location, ready to be handed over to America.

Korean film star Ha Jung-woo plays Captain Jo In-chang, a South Korean Explosive Ordnance Disposal (EOD) technician. His pregnant wife Ji-young is played by K-pop star Bae Suzy. One day away from his departure to await the birth of his first child, Captain Jo In-chang is drafted in with his team to extract the core from the warheads and transport them to the designated mine.

However, they need the help of North Korean soldier and double agent Ri Joon-pyeong (Lee Byung-hun) currently being held in prison over the border. He is the contact who knows the location of the secret bunker where the warheads are being kept.

Meanwhile, hoping to meet In-chang later on, his pregnant wife Ji-yeong starts on a journey across Seoul to the port where the American army have promised transportation to safety for her and her husband. She is unaware of his dangerous secret mission in North Korea.

The assignment does not get off to a good start for Captain Jo In-chang. Ash from the volcano clogs the engines of the plane carrying the special forces team tasked with breaking agent Ri Joon-pyeong out of jail. When their plane tragically crashes, it leaves Captain Jo and his team of unprepared technicians as the only ones on site able to take on the dangerous task of extracting Ri from prison. They’ve heard that Ri is a tough cookie, what they don’t know is that he has his own agenda.

While the Koreans are getting by just fine using only rubber bullets, their lives are put in jeopardy when the American troops get involved. The US soldiers barge in with hi-tech military equipment and begin to shoot live ammo at anything that moves. The situation is further complicated when Chinese gangsters arrive, hoping to get the nuclear devices for themselves.

Captain Jo and Agent Ri are the latest rendition of a reluctant South-North partnership overcoming their antagonism to help Korea from becoming the victim of foreign interference, a theme that occurs in many Korean movies, perhaps reflecting the country’s actual underlying anxieties. It also brings together two of South Korea’s most illustrious film stars.

Even with a run time of 2 hrs and 8 mins, Ashfall is never boring. It is chock full of exciting, well-choreographed action set pieces, and the pace never drags. Even the ‘down’ times are punctuated with wry humour, maintaining the entertainment factor. In a plot containing earthquakes, volcanos, north-south-east-west political tensions, international gangsters and family drama, it may actually be trying to throw too much at us, but having said that, it’s never difficult to follow what’s going on.

The film certainly looks like a Hollywood blockbuster, complete with a host of famous names and utilizing all the usual tropes, yet it retains a distinctively Korean flavour with its geopolitical backdrop and national preoccupations.

There has been a certain amount of symbiosis between Western and Asian cinema since the 1980s, and in that spirit Ashfall owes much to US disaster flicks such as 2012, Deep Impact, San Andreas and Earthquake, but it has the good grace not to take itself too seriously. However, it does still tell us a little about the love-hate relationship between North and South Korea, as embodied in its principle characters, with Mount Baekdu, which is sacred to both Koreas, presented here as a unifying principle.

Interestingly, there are two directors attached to Ashfall - Lee Hae-jun and Kim Byung-seo, who worked together before as writer and director on 2014’s My Dictator. Here they have created an adrenaline-fueled disaster epic with outstanding special effects but also with humour and with heart.

None of the participants here are superhuman, often they’re not even particularly heroic. Instead they’re silly, fallible, and unsure of themselves, but they muddle along and do their best, and they do it for family and also for the common good. This makes them all the more engaging and sympathetic. Like the sweets they like to munch throughout their ordeal, they understand that life is sweet, but also sour.