Film - Dawn of the Dead 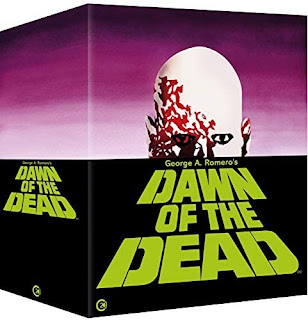 With the U.K. Limited Edition, 7 disc, 4K Blu-Ray released next Monday, a reminder of David Ames thoughts on George A Romero’s Dawn of the Dead...

The zombie film has been around for quite some time. Largely attributed to George Romero’s Night of the Living Dead, this genre has become increasingly popular with shows like The Walking Dead and films like 28 Days Later and Zombieland but for my money, what really launched this genre into the mainstream was the sequel to Night of the Living Dead and the movie we are looking at today: George Romero’s seminal 1978 classic, Dawn of the Dead.

Starting rather quickly after Night of the Living Dead, Dawn of the Dead follows two news reporters, Steven and Fran, and two military men, Peter and Roger, who steal a traffic helicopter in hopes of escaping what appears to be a widespread zombie outbreak. There is criticism in society questioning whether killing the reanimated corpses is murder or not and there is a ton of bickering but the four escape anyways, after having to kill multiple walkers.

After searching near and far for fuel, the group lands on top of a now abandoned shopping mall. While there are zombies throughout the shopping center, they are slow moving and aren’t lumped together so after some deliberation, the group decides to hold up inside the mall. The building contains everything they need and after finding ways to remain hidden or to force their way through smaller groups of the undead, the group is able to collect supplies and survive.

Once their plans go somewhat awry, which all plans in horror movies are wont to do, Roger is bitten severely and the group has to watch him suffer in pain before he inevitably transforms into a zombie. Before the final transformation, the group clears the mall completely of zombies and they begin to live a lavish lifestyle, taking anything they please and even building makeshift apartments for themselves in a classic 70s montage.

Then, just as their lifestyle is comfortable and Francine begins to show from pregnancy, a group of nomadic bikers shows up and destroys all the constructed barriers, opening the mall to the hordes of undead which were outside its walls. In the midst of this battle, Steven is hit and then attacked by zombies. When he turns, he tracks down Peter and Francine and leads the undead to them. Peter and Francine fly away in the helicopter, leaving the ending with a sense of unease and uncertainty about the two characters.

I know that I gave away the entire plot, something that I don’t normally do, but this film is so good that the spoilers won’t do it any harm. If you are at all a fan of the classic zombie movie genre (I’m talking walkers, not sprinters), this film is a must see. The main cast is spectacular. David Emge plays a great Steven, carrying the weight of his unborn child while also struggling to live up to the incredibly masculine men who have helped to save him. Gaylen Ross is good as Francine, both compassionate and sympathetic while maintain her female strength and perseverance. Scott Reiniger has a great turn as Roger: he is funny and charismatic and really pulls the heartstrings when he eventually meets his end.

Lastly, Ken Foree plays a note-perfect Peter. He is strong, straightforward, and impressive in a MacGuyver fashion. He seems to know how to do everything they need whenever they need it and he does so with a calm and strategic attitude. He is by far the best part of the film, especially in the beginning when he struggles emotionally in killing a group of inner city zombies. No matter what happens, Peter is there and ready to sacrifice everything in order to save the group.

The gore is classic for a Romero movie and is done so masterfully by Tom Savini, the dominant name of classic 70s and 80s gore in America. The zombies are all gray skinned with bright red blood and flaps of skin hanging this way and that. The best makeup in the film is Roger’s transformation. He is disturbing to look at but also, unlike a lot of the zombies, very realistic.

If you haven’t had the pleasure of watching this classic, you really ought to sit down and give it a view. It is powerful and sad and funny and damn near every other emotion you can possibly feel. It runs the gamut from horror to survival to comedy to family drama and does so damn near seamlessly. There is a reason why this film is spoken of so highly and you need to experience that reason for yourself.