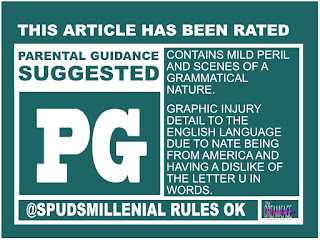 Nate McKenzie has been actively socially distancing by locking himself in his living room, eating snacks and watching movies on TV... no, not those sorts of movies. Here's his Parental Guidance suggestions for this week...

America does many things well and we are competitive on a global scale at all of those things. Among the talents we excel at are war, songs about coming back from war, imperialism, genocide, and inventing apps. But above all, we are a country full of people that can eat (and eat and eat). America invented - or at least aggrandized - the hot dog eating contest and back when food was harder to find than melanin at a Harvard v Yale Crew meet, we created an entire holiday solely dedicated to eating (and genocide!).

That has absolutely nothing to do with anything, I just wanted to mention it.

If you are like me, you're currently weighted down by reheated starch and need something to watch on the ol' boob tube while you slip into a glorious coma, one that is blissfully free of political discourse. Like tryptophan nirvana: n'om n'om n'ommmm

Here, nibble on this.

Blow The Man Down (Amazon Prime) - This movie is like if the girls from Booksmart were sisters who got stuck in a fishing village in Maine and one of them killed a man (in self defense) and then they had to cover up their crime. Luckily for them, the town is run by the elder matriarchs who are as tough as the salty dogs that sporadically serenade them with fishing songs from the docks. There is a humor in this movie that sits just below the roiling surface as sisters Mary Beth and Priscilla do their best to plug the leaking holes in their story as the strength of the women that run the town intimidates and inspires them to either adopt or abandon the only life they've ever known.

The Dead Don't Die (Netflix) - In Centerville, Ohio the sun refuses to set and for some reason that means zombies. Don't question Jim Jarmusch, that's a brain-freeze waiting to happen. Bill Murray, Adam Driver, and Chloe Sevigny are the officers protecting the townsfolk of Centerville and they do so with the competency and swiftness of the Keystone Cops on quaaludes. Rosie Perez plays Posie Juarez and Tilda Swinton is Zelda Winston. One is a news anchor and the other is a Scottish (I think?) [yes - Ed] samurai mortician. Nothing about this film makes any sense; quirky is not the word but it's the best I could come up with while I was watching so that's what I'm sticking with.

Buster's Mal Heart (Netflix) - I would take the time to explain to you the complexity of Buster's Mal Heart, and every instance of how the underlying religious iconography operates on a cellular level, while dancing around the edges of social issues, the importance of maintaining good mental health and adhering to a sensible work-life balance, but here's the thing - I still don't understand what the fuck this movie was trying to tell me. I have a sense of whatever message might be embedded but the ending is another level of ambiguous. Mulholland Drive was the last movie that I needed explained to me and I got what I needed that time by reading the damn movie poster outside the theater. This time, I'm choosing to just let it marinate in my brain until I either come to a conclusion or go insane.
Follow Nate on Twitter @SpudsMillenial
Images - IMDb
Email ThisBlogThis!Share to TwitterShare to Facebook