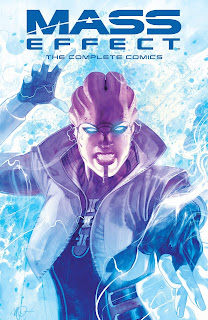 “By the goddess!” as Liara T’soni, one of Shepard’s beloved companions, would say. Amongst the many announcements or trailers revealed through Disney’s recent Investors Day there was yet another surprising reveal that seemed almost lost in the excitement, and I’m not talking about the Mass Effect trilogy remaster.

The brave commander has affected all lives in the Milky Way galaxy throughout the three games in ways the player can only view through the commander’s eyes, which is why I was pleasantly surprised when I picked up Mass Effect: The Complete Comics. The story follows a great many characters through its varying issues, from the many friends Shepard has made across the original three mass effect games, to the anti-heroes such as mercenary Aria T’loak.

The comic collection itself is comprised of various Mass Effect “Volumes” of various series including:

· Mass Effect Evolution the four-issue series following the origins of the Illusive Man),

· Mass Effect Foundation (A thirteen issue series focusing on the backstory of various Mass Effect characters from Mass Effect 1, 2, and 3.

Alongside these existing volumes the Complete Comics also includes the more exclusive issues of their time, such as C-sec officer Commander Bailey’s story of how he undergoes an investigation into citadel security (however, whilst on its release it was exclusive to USA Today magazine, it was later released alongside the Mass Effect Evolution Graphic Novel). This story does the job when it comes to setting up the corruption of a certain politician in Mass Effect 3, so it’s just excellent that they chose to include this story.

Other smaller comic series in the book include Mass Effect Conviction (a series following David Anderson and James Vega as Captain Anderson gives Vega the task of guarding an important prisoner), Mass Effect: He Who Laughs Best (an issue focusing on how the Normandy’s best pilot came to fly the iconic star-ship, an intriguing story about the “film star” of Mass Effect lore, Blasto, and another story on Aria T’loak and how she gets caught up in a shady deal made by the collectors. 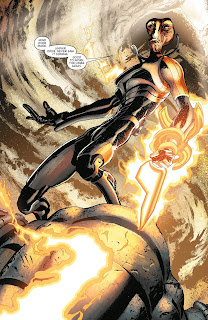 It’s interesting that only a small segment of the comic collection actually focuses on human-extremist organisation Cerberus, and yet it reads as if many of the other stories within the collection are connected with the Cerberus story, in that it feels as if Cerberus are reading through files on certain characters within the Mass Effect universe. The book's structure feels strangely like it follows from the perspective of the Cerberus from beginning to near end as the comic series throws the audience into various stories, almost like an archive of sorts that Cerberus is searching through for information on allies or potential allies of Shepard. The stories revolve around characters such as Thane, Jack, Miranda and Jacob, Wrex, Kaiden, Ashley, Liara, Kasumi, Garrus, Tali and more.

The collection interestingly explores the origin stories of certain characters whilst with others the story will simply follow events that their character’s already talk about in the games they are featured in, such as the story of how the master thief Kasumi lost the love of her life, or how Kaiden unintentionally killed his superior officer. I think, whilst it’s interesting to see how these stories play out, I believe there are other stories such as exploring Garrus and his relationship with his father, made for a much more interesting story.

Among the many stories are ones that also feel far more disconnected from the trilogy and characters in it, that we are familiar with, such as exploring events before the first game, which eventually lead to the realisation of how The Illusive Man (who, in the ME 2 game, is voiced by Martin Sheen) came to be. Another of these unique stories includes that of an unlikely Turian soldier who suggests to his superiors, the idea of spying on the Andromeda Initiative, a company with the intention of transporting all races in the Milky Way to our neighbouring galaxy, the Andromeda galaxy, and the journey of this character does an interesting job of bridging the gap between Mass Effect 3 and Mass Effect Andromeda.

There has been much speculation regarding the release of the tease trailer released for the next edition to the Mass Effect game series, with some speculating that Bioware will be connecting the Andromeda story with the story from the original Mass Effect Trilogy. We can see hints in how the camera seems to show both galaxies during the opening of the trailer, and also some even speculate that one of the races spotted in the distance, at the end of the trailer may be an Angaran, a prominent species in the Mass Effect Andromeda story (alongside races known from the original game trilogy).

Of course whilst this is speculation, if this does end up being true, now seems like the perfect time to read Mass Effect Discovery, as featured in this comic collection, because whilst your reading that series, you could also explore the stories focusing on Liara T’soni, and other characters that we may see in the next Mass Effect game.