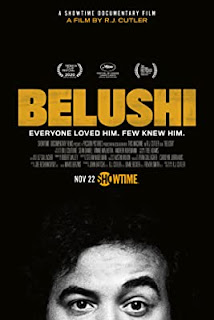 Steve Taylor-Bryant takes a look at the man behind the monologues as he watched the documentary, Belushi ...

During these very trying times I’ve not had much to laugh about, not much to enjoy. As a parent you are always in a state of absolute panic anyway about keeping your kids safe and 2020 has heightened that feeling; add in a “real life” job in a very busy store that remains open, high risk members of the family, and my usual mental health issues, and my overriding feelings for the last ten months has rarely fluctuated away from sheer terror or crippling exhaustion. That fan I have out there will tell you how it’s affected my writing and virtually wiped my output but, before you celebrate that, I’m back to tell you all about a documentary. You see the thing that has calmed me when I’ve needed it and got me through the dark times is my love of American comedy and comedians. In the last few weeks I’ve rewatched nearly twenty episodes of The History of Comedy, and laughed my way through the five part film by Mike Binder about the history of the iconic venue in Los Angeles, The Comedy Store. Both great snapshots of bygone eras of comedy packed full of laugh out loud moments but neither tugged my heartstrings enough to battle the anxiety and tiredness to write about them. Until today when I watched R. J. Cutler’s film Belushi. 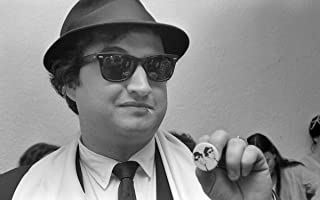 I don’t remember John Belushi first hand, I was only seven years old when he died but, as I discovered my love of comedy and of American sketch comedy in particular, obviously archive material and the films of John Belushi played a huge part in my education. Now as a middle aged man with past addiction problems I understand the torment that our heroes go through in their own battles and by the grace of [insert relevant deity] go I. Cutler’s film is slightly different to any other documentary though as it’s told primarily through Belushi’s own notes and letters (narrated by Bill Hader as John Belushi) and recorded interviews made over decades by Cutler and it is quite the emotional rollercoaster.

I won’t spoil your enjoyment of the film that is currently on Sky Documentaries here in the U. K. but it is a stunning trip down memory lane with reliable witnesses who were all on the journey together. Dan Ackroyd’s thoughts and memories play a huge role in the film as do those of Judith Belushi-Pisano, John’s widow, and it's Judith’s recollections of life married to a comedic genius and tortured soul that add the emotional relevance to a great film full of behind the scenes archive footage of SNL, Animal House, National Lampoon, and of course The Blues Brothers.

Belushi contains enough humour for a viewer who wants to watch old SNL sketches and hear stories from Chicago and his improv days but, be warned, the battle with addiction and mental health plays a prominent and very important role in a film that had me biting back tears as Judith sang over the closing credits.

Dark and sombre, but utterly fascinating, Belushi was a must watch for me and may be for a lot of you out there will be important too.
Follow Steve on Twitter @STBwrites
Images - IMDb
Email ThisBlogThis!Share to TwitterShare to Facebook