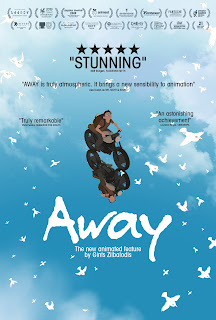 Munro Films has announced the digital download release of the multi-award-winning animated film Away on January 18th 2021. Watch the trailer...

Away is about a boy travelling across an island on a motorcycle, trying to escape a dark spirit and get back home. Along the way he makes a series of connections with different animals and reflects on the possible ways he ended up on the island. Part dream, part reality, AWAY explores our common, universal need to ﬁnd a connection.

The multiple award-winning film, with a Rotten Tomatoes score of 100%, took the prestigious Contrechamp Award at Annecy International Animation Film Festival 2019. Director, writer, producer, animator and film score creator Gints Zilbalodis worked on the ﬁlm for three and a half years, writing the fascinating story, creating the beautifully animated landscapes and characters, and composing and recording the enchanting music to this stunning dialogue-free ﬁlm.

AWAY is available to pre-order now from Apple TV and iTunes and to purchase from Sky Store, Amazon, Google, Microsoft, Rakuten and Sony from January 18th 2021.
Email ThisBlogThis!Share to TwitterShare to Facebook