Film - Outside the Wire 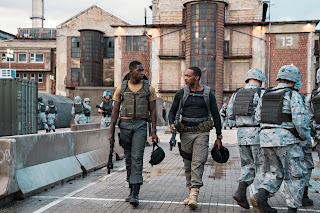 There's hi tech sci-fi action with all guns blazing coming to Netflix next month. Watch the trailer for Outside the Wire...

Set in the future, Harp (Damson Idris), a drone pilot, is sent into a deadly militarized zone where he finds himself working for Leo (Anthony Mackie), an android officer, tasked to locate a doomsday device before the insurgents do.
Also starring Enzo Cilenti as Miller, Emily Beecham as Sofiya, Michael Kelly as Eckhart and Pilou Asbæk as Victor Koval, Outside the Wire is directed by Mikael Håfström from a screenplay by Rob Yescombe and Rowan Athale.

Outside the Wire comes to Netflix in the United Kingdom on January 15th, 2021