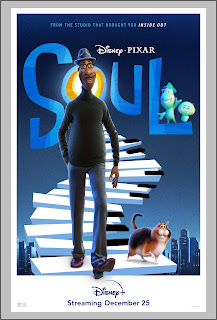 The new Pixar animation Soul comes to Disney+ on Christmas Day. Find out a bit more about the film from the creatives involved ...
Press Release
What is it that makes you...YOU?
Pixar Animation Studios’ all-new feature film Soul introduces Joe Gardner (voice of Jamie Foxx) – a middle-school band teacher who has a passion for jazz.
“Joe wants more than anything to become a professional jazz pianist,” says director Pete Docter. “So when he’s offered a rare, once-in-a-lifetime opportunity to play with one of the greats, Joe feels he’s reached the top of the ultimate mountain.”
But one small misstep takes him from the streets of New York City to The Great Before – a fantastical place where new souls get their personalities, quirks and interests before they go to Earth. According to Docter, the idea for this unique world was 23 years in the making. “It started with my son—he’s 23 now—but the instant he was born, he already had a personality,” says Docter. “Where did that come from? I thought your personality developed through your interaction with the world. And yet, it was pretty clear that we’re all born with a very unique, specific sense of who we are.

“In our story, everyone is born with a soul,” continues Docter. “And those souls don’t just show up unprepared, they’re trained and given personality and interests.”

Joe Gardner, however, doesn’t feel like he belongs in this land of new souls.

Determined to return to his life, he teams up with a precocious soul, 22 (voice of Tina Fey), who has never understood the appeal of the human experience. “Sometimes souls have a little bit of trouble finding that special spark to earn their way to Earth,” says co-director Kemp Powers. “The Counselors at The Great Before call on mentors to help inspire these souls—extraordinary people in history like Abraham Lincoln. And that’s worked for every single soul except 22, who’s a bit like a petulant pre-teen. And she definitely, without a doubt, has no desire to go to Earth.”

Joe inadvertently becomes 22’s next mentor, and he figures if he can help her, maybe he can make it back to Earth in time for his big gig. “He thinks that all he has to do is help her find her spark—that thing that makes life worth living,” says producer Dana Murray. “He thinks it’s easy. It’s like loving jazz, which seems so obvious to him.”

But as Joe desperately tries to show 22 what’s great about living, he may just discover the answers to questions he never even thought of asking about his own life. Says head of story Kristen Lester, “What makes a meaningful life?’ Is it about the relationships you have? Is it about being present? You can have a great conversation, then a great cup of coffee—do those things together become meaningful? Our story doesn’t really land hard in one camp: relationships, family—there’s a sense that it’s all of it.”

Co-screenwriter Mike Jones agrees. “I think no matter where we are or how far we’ve come, we sometimes wonder about greener grass. We’re always pushing. There’s always that drive in an artist to create something, to never be satisfied.”

Docter recognizes the idea in his own life. “I’ve been so lucky to work with some incredible people and make movies that have been seen around the world,” he says.

“But I realized that as wonderful as these projects are, there’s more to living than a singular passion—as expressive and fulfilling as that may be. Sometimes the small insignificant things are what it’s really about.

“I remember one day I was biking and I stopped and picked a raspberry,” he continues.

“It was warmed by the sun and became the most amazing raspberry I ever had. I still remember that nearly-nothing moment vividly. Almost any moment in our lives could be a transcendental moment that defines why we’re here. This film is about broadening the idea of a singular focus to thinking more widely about what life has to offer and what we have to offer life.”

Set in the fast-paced and jazz-centric New York City and the abstract illusionary world of The Great Before, Soul capitalizes on the contrasts between the big city and the cosmic realm. Filmmakers’ approach to the film and the characters’ performances was inspired in part by two diverse influences: the art of English artist and satirical cartoonist Ronald Searle, and the animation from Disney’s 1961 animated classic 101 Dalmatians. Says animation supervisor Jude Brownbill, “Searle and ‘101 Dalmatians’ influenced the look and feel of ‘Soul’ in almost every department—from the imperfect shape of buildings, furniture and props, to the number of folds on a characters’ clothing. For animation, Searle's influence inspired bold and direct posing within clear compositions that lead the viewer's eye through the scene. Studying ‘101 Dalmatians’ reinforced the importance of laying out one acting idea at a time and holding within key poses to allow important moments to be read more clearly.”

Complementing those visual choices is a two-pronged approach to the music.

“GRAMMY®-nominated Jon Batiste—singer, composer, songwriter, band leader, jazz genius—is producing the jazz, which amplifies the gritty, beautiful New York City-side of the film,” says Murray. “When you see Joe’s hands playing in the film, that’s Jon’s playing. Our animators studied reference footage of Jon at the piano to capture details of how he plays—everything from how his fingers move to the breaths he takes.

“Trent Reznor and Atticus Ross from Nine Inch Nails took on all the music from the Soul world,” Murray continues. “It’s so ethereal. The contrast they bring is really exciting. It’s an unexpected choice for Pixar—this is like nothing we’ve ever done before. I love the combination we have.”

“You want these characters to be as authentic and real as possible,” says Docter. “I’m an amateur musician, and I do really relate to Joe, but I’m not African American. I didn’t grow up in that culture. Having Kemp on board was a huge help in that regard, and the cultural consultants and musicians we’ve worked with brought us so much knowledge— we wouldn’t have been able to make the film without their help and support.” Cultural and music consultants include Dr. Peter Archer, Jon Batiste, Dr. Christopher Bell, Terri Lyne Carrington, Dr. Johnnetta Betsch Cole, Daveed Diggs, Herbie Hancock, Marcus McLaurine, George Spencer, Ahmir “Questlove” Thompson and Bradford Young.
Rated PG, Disney and Pixar’s Soul will be available exclusively on Disney+ on Dec. 25, 2020.
Images & info - Disney+
Email ThisBlogThis!Share to TwitterShare to Facebook