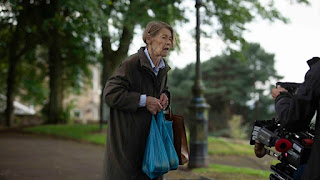 When her best friend Elizabeth goes missing, Maud (Glenda Jackson) is convinced something terrible has happened. But her search to find Elizabeth unearths an altogether darker unsolved mystery: her sister’s disappearance, long buried in the recesses of her memory.

Can Maud discover the fate of both missing women before her dementia erases the clues and the answers are lost to her forever?


What drew you to this project?

The script. The fact it was written by Andrea Gibb, whose work I’ve always admired. I read a script as quickly as I can, without dwelling on it. There’s things that stay with you and they’re the things that make you decide whether you want to do something or not. And then it’s the people involved: Andrea, Chrissy Skinns the producer, and then thinking about who you can get to work with you. But first it’s always the script.


With the casting, can you tell me about the journey to Glenda?

Actually she was the first person that came to mind. I’ve been lucky on the last three or four occasions to get the actor I first thought of. We had to make a really careful approach because I knew she hadn’t done television or film for about 25 years. So I flew out to New York for the day to meet her, hoping that she would say yes, and that’s how we got her.

She’s amazing. I mean she puts us all to shame. When you’ve got an actor in every scene, you’re with them every day, you get to know them incredibly well, you get to know what they do really well. I missed her on the two days she wasn’t with us, it was like making a different film. It’s a different relationship than if it’s a bigger cast and if people are coming in and out all the time, she’s the constant and the film is about her. It was a really special experience for me, I’ve been a fan all my life. I remember seeing her in Elizabeth R, and seeing her in Women In Love. So, it’s just amazing that I got the opportunity to work with her. 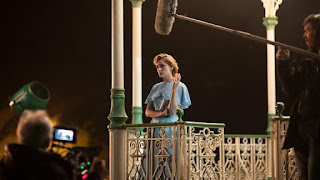 There are two time periods in the film. How did you approach that as a director?

You have to find someone that the audience will believe is [Glenda’s] Maud 70 years previously. I think we will because Liv Hill is so amazing too. The two of them met in a brief rehearsal. I imagine if you’re a young actor and you look who’s playing you older, then you just take up some of those little things and use them. Then you put that family together, you get Sophie Rundle who’s playing her sister, who’s those few years older and then Mark Stanley playing Frank. When it feels right, it’s right, and they felt right. Liv Hill is amazing, as the 14-year-old Maud. It’s quite an extraordinary performance.

What were the challenges of having the story moving across the two time periods?

Andrea has laid it out beautifully in the script. But it’s further complicated by people from the past being in scenes in the present, in her state of mind she’s seeing people from the past in her own sitting room or her own garden and you’ve got to make that believable too. It’s a way of filming it, that you maybe leave Glenda in the present and just slowly go through into the past and hopefully you won’t notice you’re there until you’re in it.


What about that thriller pulse that runs through the story, how did you approach that?

I didn’t see it as a thriller as much as a mystery. We’re never really sure if she’s remembering correctly. What does she know? What has she forgotten about, and will she remember later? That’s the way you’ve got to approach it. You’ve got to try and tell that story in a way that works for an audience. It’s very complex, it’s probably one of the most complex scripts I’ve worked on in that respect and the detail of little things she discovers. 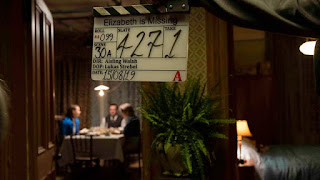 In terms of how the project looks at dementia, how do you think it might be different or surprising to what people might expect with a dementia story?
I knew nothing about dementia until I started on this and I met a couple of people and spoke to a lot of other people. I think very often, when one approaches difficult subjects: Mental health, dementia or any kind of addiction, there’s a way to do it. This does it in a rather beautiful way, as Glenda said, and she may have said it to you: "I’m in my world and I’m fine. It’s everybody else that’s crazy and mad and not believing me and not listening to me." You do see the progression in that illness to a point when really, she’s not who she was at the start. But in her own mind she’s completely sane. I didn’t want her to play old lady at 83, she’s a woman at 83 who’s able to go out, do her shopping, have a life and gradually her world starts to close in. She’s locked into her own house and has to move in with her daughter, she doesn’t know where she is. There’s a lot of truth in it that I’m sure that people who’ve been caring for people with that illness or have that illness themselves will get quite a lot out of it. It’s my responsibility as a director to get that right and understand it and make sure that you’re within the realms of the truth, that’s really important to me. Over my career, I’ve spent a lot of time telling those truth-based stories and you’ve got to get it right. It’s really important because people are going to watch it and respond. It’s an entertaining story, it’s a rather beautiful story but it touches on those things that are often very difficult for people to talk about.

During the production were there any particular things that came up as challenging, for example the weather?

The weather is tough but it’s like Ireland, you find a way to do it. You’ve got to embrace it because you can’t wait. We were very lucky because yesterday for example, it started raining and we had to go inside and actually it looked rather amazing looking out that window and seeing the rain, so you try and make it work in your favour. Time is always an issue. I’ve been in a situation when you’ve got half an hour to go and you’ve got to shoot a two-page scene, you’ve just got to try and do it. The schedule is challenging, five weeks to make a film with a lot going on. How to get in and out of those flashbacks, you don’t normally have that in a film. Those were the things that were challenging at the time. But you try and keep things quite simple somehow because the story and the characters are interesting. You don’t need to make it complex; you just need to put Glenda in front of the camera and let her go.


What do you hope an audience will take from the film?

It’s a rather extraordinary performance of an actor portraying a woman who’s got dementia and hopefully people will experience that. And feel that maybe they know something about it or that they understand it a little bit more. It’s also a rather emotional journey too. It’s a woman discovering something from her past 70 years ago. I hope they’ll laugh; I hope they’ll cry, and I hope they’ll feel slightly afraid for her on some occasions. I hope they’ll sink into that world and experience it. But at the heart of it is Maud, this 83-year-old woman portrayed by Glenda Jackson magnificently. I think that’s really exciting after it’s been 27 years or however long it is since she’s been on screen. So very often there aren’t that many roles for women and here’s a woman of 83, an amazing role to play and a real challenge too. I think for an audience to see that is interesting.
Images & info - BBC
Edith Bowman will host the digital ceremony tonight (8th December) at 19:00 GMT on BAFTA social channels including youtube.com/bafta and followed by a highlights show on BBC Scotland at 22:00 GMT.
Email ThisBlogThis!Share to TwitterShare to Facebook