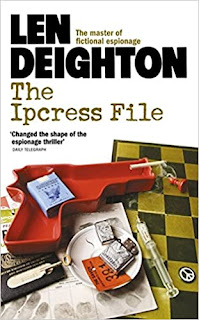 Never mind the Michael Caine film, Len Deighton's famous novel that introduced Harry Palmer to the world, The Ipcress File, is being adapted into a six part television series for ITV...
Press Release
Starring Joe Cole (Gangs of London, Peaky Blinders) in the iconic role of Harry Palmer alongside Lucy Boynton (Bohemian Rhapsody, Murder on the Orient Express) and BAFTA award winning actor, Tom Hollander (The Night Manager, Birdbox), the book has been adapted by Oscar nominated and BAFTA award-winning screenwriter, John Hodge (Trainspotting, T2 Trainspotting).
The Ipcress File is an enthralling and atmospheric espionage thriller set in Berlin and London during the 1960’s and Emmy award-winner James Watkins (McMafia, Black Mirror, The Woman In Black) will direct each of the 6 one-hour long episodes.

The Ipcress File was Len Deighton’s first spy novel introducing the iconic British spy Harry Palmer and set against the backdrop of Cold War Europe. To date the novel has sold 10 million copies worldwide since it was first published in 1962.

It’s 1963. Cold war rages between West and East. Nuclear bombers are permanently airborne. In this highly charged atmosphere, we join Harry Palmer – a British army sergeant on the make in Berlin. In this newly partitioned city, a sharp working-class young man with sophisticated tastes can make a lot of money. Wholesaler, retailer, fixer, smuggler, Harry’s varied interests bring him into contact with everything and everyone – until the law catches up and it all comes crashing to a halt.

Harry finds himself sentenced to eight years in a grim military jail in England, all his prospects abruptly torn away.

But his impressive network and efficiency have not gone unnoticed, and a gentleman from British intelligence has a proposal. To avoid prison, Harry Palmer will become a spy. And the case on which he cuts his teeth will be The Ipcress File.

Harry’s links to the man suspected of kidnapping a missing British nuclear scientist result in him being conscripted for a dangerous undercover mission that takes him from the Beatles’ London to the Berlin Wall, from the back alleys of Beirut to the white hot sand of a Nuclear Atoll in the Pacific.

A twist-laden spy thriller with a rich cast of characters, The Ipcress File is a stylish and tense tale of abducted scientists, brainwashing, inter- departmental rivalry, treason, and a possibly unwise romance.
ITV’s Head of Drama Polly Hill has commissioned the series from Altitude and will oversee the drama from the channel’s perspective. She said, “I'm thrilled to be bringing John Hodge’s brilliant adaptation of such an iconic novel to ITV. Harry Palmer is an incredible part and this would have been impossible without the right actor, so we are all delighted that Joe Cole will take on the role. The talent on and off screen means this will be a treat for audiences when it comes to ITV.”

Director and Executive Producer James Watkins added, “We can’t wait to bring Len Deighton’s intoxicating web of spies - sexier than Smiley’s people, more real than Bond - to a wider television audience. With his sly wit and understated integrity clashing against the establishment, working-class spy Harry Palmer is more relevant than ever.”

Writer and Executive Producer John Hodge said, “This is a wonderful opportunity to inhabit a time when the post war world was morphing into the way we live now, when social mobility, civil rights, and modern feminism were forcing their way into public consciousness, and all of it happening with the world divided in two and both halves threatening to blow the whole thing sky high.”
The series marks the first major production for Altitude Television, part of the larger Altitude independent British media group behind notable releases such as Amy, Moonlight, Diego Maradona, Calm With Horses, Horrible Histories: The Movie – Rotten Romans, and Rocks. The series will be produced in association with ITV Studios.
The Ipcress File will be executive produced by Will Clarke (Filth) and Andy Mayson (Ghost Stories) for Altitude Television, Andrew Eaton (The Crown) for Turbine, Sandy Lieberson (Performance), James Watkins and Hilary and Steven Saltzman. The series will be produced by Paul Ritchie (McMafia, Slumdog Millionaire).

The Ipcress File will be filmed on location in Liverpool and Croatia during 2021.
Image - Amazon
Email ThisBlogThis!Share to TwitterShare to Facebook