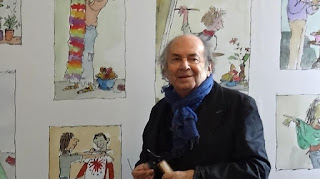 Maybe not one for the coulrophobes among you, but an animated adaptation of Quentin Blake's Clown is coming to Channel 4 this Christmas Day. Read an interview with the man himself (Sir Quentin Blake, not the clown)...
Press Release

Inspired by a book of the same name (and one of its author's favourite creations), Quentin Blake’s Clown is a half-hour animation that brings to life the adventures of a little toy clown, who has been thrown away with a group of fellow toys by an owner who has outgrown them. Clown has been dearly loved for many years in childhood and he has just enough magic left in him to set out and try to find a new home for himself and his friends. His journey takes him through the helter-skelter streets of the City, dodging scary dogs and even scarier adults; he even finds himself mistaken for a child and performs at a school Christmas assembly. Each time Clown thinks he might just have found a perfect new owner, and his hopes start to rise, he gets thrown away again... and again. At last, he finds a child who will accept him, for all his imperfections, and together as night falls on Christmas Eve, they set out to rescue his toy friends. Back in his new home, Clown helps the children to get the flat ready for Christmas. Their mother returns for a happy and festive finale. You see toys do come to life when children love them!

Can you believe Clown is 25 years old?

Actually, this is less difficult than you would imagine. The first picture storybook of my own was called Patrick and that was published just over 50 years ago.


What was the inspiration behind Clown?

I know what the inspiration behind Clown was. It all came from a film called Les Enfants du Paradis which I saw many years ago and have seen two or three times since. It’s about 19th century theatre in Paris and one of the characters is called Debureau who really existed. He was a clown – not a circus clown but one in the theatre – a white-faced clown who was actually a mime. He has what they call in French a visage de farine, which means that he’s got flour on his face to make it white. Of course my clown is nothing like as serious as that, but that is where he came from.

You’ve described Clown as one of your favourite characters. Why?

I was pleased to have invented Clown because not only is he an amusing character but he knows how to behave in relation to his friends and other people. How to behave is part of the point of the book. I also like him because he is a mime, so he is telling stories by the way he behaves and of course that is what you do if you’re illustrating books.


Did you have a Clown, a favourite toy, when you were growing up? Did you like the circus as a child?

I have no memory of toys that I had as a child and, of course the circus has nothing to do with this book.

You must have been approached many times before about animating your books – what made you say yes to this project?

In fact I have not been much approached about animating my books, but this one seems to lend itself very well both to atmosphere and to running about.


How does it feel to see your illustrations brought to life?

I think my drawings are alive anyway – animating them brings them to life in a different way and of course that is very interesting.

What were the challenges of telling a wordless story for the book?

When I set to work on Clown I wrote one or two sentences before I realised that, of course, this is a story about a mime and so it has to be told without words. That has its own special problems. You have to have a lot of drawings if you are to show every change of gesture and expression in Clown’s reactions.


Would you return to that format again?

I don’t see myself doing another such book, but of course the expression of feeling in gesture and reactions goes through every picture book.


Do you usually tend to illustrate your words or write around the illustrations?

I think most of my picture books begin with some notes of pictures, then I go to text and after that come back to the pictures. 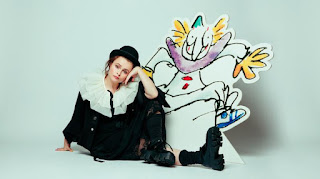 How did you feel about Helena Bonham Carter narrating the adventures of Clown?

I feel very privileged that Helena Bonham Carter is narrating the story, but that also fits in with all the attention to detail and atmosphere that [director] Luigi Berio is giving to the film.

There is a lot of sadness in this book, which tells a serious story in some ways. Is it important for you though that your books for children have reasonably happy endings, as Clown does?
I don’t think the books all have very obviously happy endings; Cockatoos ends with the words, ‘Some people never learn.’ Nevertheless, I think that books for children have to have hope in them somewhere. I know also that the end of the stories are open to interpretation and young and old readers may like to think about what happens next.


Do the more grown-up themes of poverty, discarded toys, and the end of childhood make Clown’s story appealing to adults as well?

I think and hope that Clown has something to say to adults as well as children.

You have sometimes brought back an iconic character, such as Mrs Armitage, back for other books. Would you consider bringing back Clown for more adventures?

In some ways you could say that I do two kinds of picture books. There are those that have some more serious aspects; curiously, Clown is one of them and so are, for instance, The Green Ship and The Story of the Dancing Frog. Those books have the shape the story needs and I wouldn’t consider returning to them. Mrs Armitage has no such serious dimension and I wouldn’t guarantee that she might not even turn up again in company with the faithful Breakspear.

What are your next projects?

I’ve just recently published a book called The Weed, which is about the regenerative power of nature and I am just putting the finishing touches to another book called Mr Filkins in the Desert. One purpose of that book is to give me the chance to draw not only desert landscapes but others with rocks and cactuses and dark forests. If it has a moral, I think it is about putting the best interpretation on difficult situations.


How do you tend to spend Christmas?
I shall spend Christmas drawing.
Quentin Blake's Clown will premiere on Christmas Day at 7.40pm on Channel 4 and available to stream on All 4. A look behind the scenes of the animation, with footage from the production team and interviews with Sir Quentin Blake and Helena Bonham Carter will also be available to stream on All 4 once the episode has aired on Christmas Day.
Email ThisBlogThis!Share to TwitterShare to Facebook