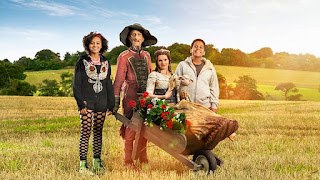 Following the much loved and critically acclaimed 2019 adaptation of Worzel Gummidge, a third new one-hour film will be screened on BBC One this Christmas Eve - Worzel Gummidge: Saucy Nancy. Ahead of that, the BBC have released an interview with Mackenzie Crook...


Mackenzie Crook has written another beautifully crafted and magical episode, inspired by the classic books by Barbara Euphan Todd, which he will direct and star in, bringing a world of adventure to all the family.

When Worzel Gummidge, Susan and John visit a scrapyard, Worzel overhears the grumbling of a foul-mouthed old friend, the carved ship’s figurehead, Saucy Nancy. She has been languishing, unsold in the yard for years and longs to return to the sea. Worzel and the kids promise to get her there, but will her ship be waiting? Worzel doubts it, but Nancy is convinced. She can feel it in her carvings.

Adventure unfurls, as the strange foursome navigate their way to the coast on foot, by bus, wheelbarrow and motorbike and sidecar. It was never going to be straightforward. In a rare trip out of Scatterbrook, Worzel gets to see a wild moorland and the spectacular white cliffs of Seashell that provide the backdrop to this story of friendship and belonging.

Rejoining Mackenzie Crook as Worzel Gummidge for this new adventure are Steve Pemberton as Mr Braithwaite, Rosie Cavaliero as Mrs Braithwaite, India Brown as Susan and Thierry Wickens as John. Together with Shirley Henderson (Harry Potter) as Saucy Nancy and acting legend Vanessa Redgrave as Peg.


What was the reaction like last year to the double film?

The reaction was wonderful, especially from kids, which was the main point as I wanted families to watch it together. I wanted mostly for kids to find it funny and they did.


Tell us the story this time around.

It’s the Saucy Nancy story which is one of the original books. I haven’t stuck very closely to the book but she’s an old ship’s figurehead and an old friend of Worzel’s. In my story Worzel, together with the kids, find her languishing in a salvage yard.

They decide to buy her and return her to the seaside. It’s a really simple road trip story. Worzel and Saucy Nancy, of course, can’t be seen by other humans so it’s about the mischief and adventures that befall them as they try to make the journey. It’s a change of scenery and a day away from Scatterbrook Farm. 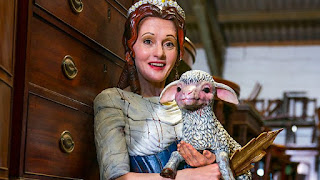 Saucy Nancy has a bit of a potty-mouth. How much fun was it to make up fake swear words for her to say?

It was brilliant. I had a great time writing a list of rude things you can write on a cow for the last episode. This time Saucy Nancy is this hardened sailor and so it’s supposed to sound like swear words but not quite right.

Has John and Susan’s relationship with Mr and Mrs Braithwaite changed since we last saw them?

We have some lovely scenes with the family in this one. One scene where they’ve just finished their evening meal and it’s obvious that the kids are there to stay now and they’re a family.

There’s a lovely bit in the script when the kids go off to the seaside by themselves and it’s Mr Braithwaite who is the most concerned. He’s beside himself with worry, he keeps trying to make excuses to go to the seaside to see if he can find them, and Mrs Braithwaite is the one who says ‘No, give them their independence.’

So I wanted to give the feeling that this is their home now, there’s no risk of them being taken back to any foster home or life they came from before, and they’re happy. So that was lovely, to do that.

Thierry and India, who play John and Susan, play their parts so well and they’re such good friends, it’s a joy to see them laughing together off set.

The first two films had a strong environmental message: is that the case this time?

With the first two stories, the storyline involved the environment and climate change, but I didn’t want to keep going on about it too much. Hopefully just seeing the nature in this one will get people interested in it.

Have you had a good response to that environmental message?

Yes, I have. People noticed it but it wasn’t shoved down their throats and I think people appreciated it. Kids are already on board with that message, mind you: it’s the grown-ups who need to be brought up to speed on it. It was done in a gentle and interesting enough way that people took it on. 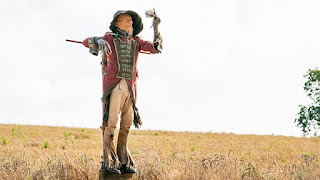 You have to spend hours in make-up as Worzel. Is there any part of you that regrets going full blast with that when you’re sitting there?

The process of getting into the make-up is long but I don’t mind it at all. It’s time to reflect and get into character.

It was very full-on this time around because we had to wait until later on in the year to film because of Covid and we had awful weather, days of torrential rain, but we got away with it and it all looks beautiful on screen.

Tell us a bit about your guest stars.

To find myself directing Vanessa Redgrave on a windswept beach was incredible. Shirley Henderson is brilliant as Nancy.

And Brian Blessed’s voice is in it. It’s a brilliant scene where Worzel meets a different scarecrow, a tiny little ornamental hand puppet scarecrow, and the joke is that he used to be a giant but he has had so many pieces replaced that he ended up tiny but his voice is still a giant’s voice.

We thought ‘Who has a big voice?’ and obviously Brian Blessed was the first choice. He said yes, which was incredible.


What part does music play in this film?

Music is such an important part of Worzel, as it was in Detectorists.

I knew I wanted to include sea shanties and so The Unthanks, a band from the North East, composed the music. They were excited because Rachel and Becky’s father is a famous sea shanty singer.

I got the lyrics from the poem Mother Carey by Cicely Fox Smith. The lyrics are poignant and I asked Adrian in The Unthanks to put those to music which he did and it’s beautiful. It’s a song Vanessa sings at the beginning and the end.

And then they’ve composed two more sea shanties to put in there. There’s a lovely scene at the end where they end up in a pub where fisherman and sea folk gather to sing this sea shanty so we got The Unthanks to actually perform in that as well.
Worzel Gummidge: Saucy Nancy – airing on Christmas Eve, 24th December, at 5:55pm on BBC One.