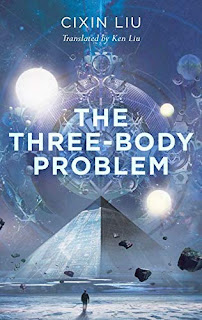 Steve Taylor-Bryant is not too lost in translation as he read The Three-Body Problem by Liu Cixin, translated by Ken Liu...

Due to reading difficulties in my younger days, and some stunted learning because of that, there has always been a type of book that scares me to attempt, the ‘hard’ sci-fi, or ‘heavy on the science’ – fi. I just am not academically gifted enough to grasp pages of equations and what that means in regard to some future light years away. I come at books with a D grade in remedial blended science, I know not to drink acid and I am sure that more than magic keeps an aeroplane in the sky, but that is about it. Grand space operas full of Star Wars style fighting or real human interactions and consequences, fine, maths and physics? Not so much. I also have a strained relationship with translated works. Some mainly translated from Russian authors I have got on fine with, the words are all there but so is the context, the emotion, and the feelings. Some have given me the English words in an order that makes sense but somehow has missed the heartbeat that would have been in the original text.
Why am I waffling on about my bad education and translated woes? Because I wanted to read a Chinese science fiction book by Liu Cixin, who in his own words, finds physics and maths and equations easy and beautiful, and translated by Ken Liu and I will be honest, I struggled with the first few pages. There were a lot of Chinese cultural events and political stuff that I was not familiar with, and a translator note on every other page I was worried would remove me from the story. So, I treated it like I would my beloved non-fiction, got into my reading groove and was astonished.

1967: Ye Wenjie witnesses Red Guards beat her father to death during China's Cultural Revolution. This singular event will shape not only the rest of her life but also the future of mankind.

Four decades later, Beijing police ask nanotech engineer Wang Miao to infiltrate a secretive cabal of scientists after a spate of inexplicable suicides. Wang's investigation will lead him to a mysterious online game and immerse him in a virtual world ruled by the intractable and unpredictable interaction of its three suns.

This is the Three-Body Problem, and it is the key to everything: the key to the scientists' deaths, the key to a conspiracy that spans light-years and the key to the extinction-level threat humanity now faces.

Yes, there is a heavy scientific element to this story, concepts and mathematics and physics beyond my comprehension, but never at any point did I feel excluded from the story because of the brilliant way that Cixin wrote. There are elements of the science explained within the context of a video game, there is complex ideas discussed but with non-scientists in the room, so these concepts are dumbed down and explained easily to the policeman/soldier/dyslexic reader who was scared of a book. The cultural significance of things throughout China's rich and varied history is built into the story or to the incredibly fleshed out characters, and if there is a significance not in the text but vital to your understanding for your continued enjoyment of the story then there is your reliable narrator and translator, Ken Liu with a small footnote on the page that, rather than being off-putting, became a vital companion throughout my amazing journey.

Did I understand everything that happened within The Three-Body Problem? Of course not, I did not suddenly become a scientist over night, but neither did all the characters within the book and they are science people so it's all fine. What I did get was an education, a tour through the underbelly of Chinese political life over four or five decades, I got enough science explained to enjoy the book and feel smarter at the end of every chapter, and I got a story of human ingenuity and very human frailty and flaws. All in all, I got possibly one the best books I have ever read, I had nothing to be scared of, and I have already ordered the next two books in the series.
Follow Steve on Twitter @STBwrites
Image - Amazon
Email ThisBlogThis!Share to TwitterShare to Facebook