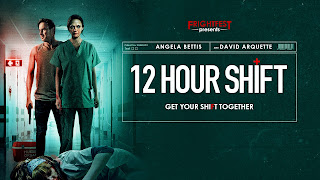 Coming to Digital Platforms on Monday, thanks to Signature Entertainment and Frightfest Presents, Ren Zelen clocks in for a 12 Hour Shift...

12 Hour Shift is a timely warning as to where a system of chronically overworked and underpaid hospital staff might conceivably lead. The film is a pitch-black comedy/neo-noir written and directed by actress-turned-director Brea Grant and stars Angela Bettis as Mandy, a drug-addicted nurse toiling in an Arkansas hospital in 1999.

Permanently exhausted, Mandy doesn’t have much time for niceties with her fellow nurses. The film opens with her about to start yet another double shift. However, she does have a side scheme going with another nurse, Karen (Nikea Gamby-Turner), geared to making some extra money. This involves harvesting the organs of the recently deceased and passing them over to a go-between, the feckless Regina (Chloe Farnworth).

Mandy makes a superficial effort to appear kind to patients and their relations, but it’s merely a habit she has cultivated while she virtually sleepwalks her way through her hospital duties and chores. The organ harvesting business requires Karen to cover for Mandy while she observes the patients and decides which of them are terminally ill, and if necessary, to use bleach to kill them off quickly.

Mandy is skilled in removing viable internal organs to hand over to kingpin Nicholas (ex-wrestler Mick Foley) and his gang of bikers and petty criminals who sell them on the black-market to rich buyers. Their big mistake is using the self-centered, amoral and terminally stupid Regina as their go-between.

Complications ensue after Regina loses Mandy’s latest shipment, including a kidney which Nicholas vows to remove from her if she doesn’t find the one she’s lost. Although she only has herself to blame, Regina obviously doesn’t want to be the substitute which provides spare bodily parts. Inevitably, she can’t locate the missing organs, so she returns to the hospital to pester Mandy, and that’s when things get much worse for all involved.

Aside from Regina’s persistent idiocy, plans are further muddied by the arrival of awkward and officious Officer Myers (Kit Williamson) and his charge, the comatose murderer Jefferson (David Arquette), who is being treated at the hospital.

The protagonists need to get their hands on some more internal body parts - but where? There’s the choice of a dialysis patient, a troublesome hypochondriac, a body already in the morgue or Jefferson the murderer. It’s a nasty old business extracting organs, but Mandy has a considerable drug habit to support, temporarily fed by pilfering medication, a habit that has already gotten her put on probation by her supervisor Janet (Brooke Seguin).

What Mandy doesn’t bargain for is reckless Regina’s impulsive plan to impersonate a nurse (very unconvincingly) and ‘harvest’ an organ herself, despite not having the first clue as to how to go about it.

Her ineptitude turns the facility into a bloodbath of badly performed killings and impromptu ‘surgeries’, leaving the increasingly overwrought Mandy to frantically mop up the mess she leaves in her wake.

Mandy may have lost her moral compass some time ago, but at least she’s competent at what she does and we are encouraged to commiserate with her solitude and desperation. Angela Bettis as Mandy provides the grounding for the mayhem, exuding all the jaded fatigue of a smart person trapped in an arduous job on a minimum wage. The plot rests entirely on the incompetence of the characters surrounding her put-upon character, and tragically, we get the merest inkling that perhaps Mandy once cared about her patients beyond their capacity to supply her with organs she can sell.

We feel Mandy’s utter exasperation when the witless Regina succeeds in further messing up her already messed up life. Regina is simply so selfish and harebrained that she becomes increasingly less comedic and more truly monstrous, in terms of her utter disregard of the murderous chaos she creates. Chloe Farnworth gives an enthusiastically ditzy performance as a character who is a dangerously empty-headed agent of death and destruction. Regina’s stupidity may be considered funny, but its also deeply irritating and I for one, immediately wished that the missing kidney would be replaced by one of her own. It really is the least she deserves.

12 Hour Shift never takes itself too seriously, although maybe it should. The last scene shows Mandy snatching the briefest moment of sleep in her car, before having to get up and start a new shift, all over again. The idea that Mandy’s job, which is the business of caring for the ill and vulnerable, has become so soul-crushingly routine and meaningless, that it becomes merely a way for her to gruesomely and illegally fund the drug-habit which is her only respite, is actually a profoundly depressing notion on which to base a comedy.