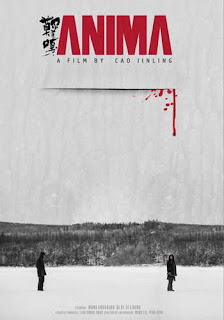 You know starting reviews is one of the most difficult bits of writing reviews. Do you start with ‘I liked this…?’ Do you start with ‘this film is the story of…?’ It is sometimes a little awkward. So, Anima is the story of two brothers – Tutu and Linzi. They live in what is now the Moerdaoga National Forest Park in Inner Mongolia. The film is set in the 1980s – although I have to say I did not particularly realise that because they are not a lot of obvious clues – when deforestation in the name of economic development was underway.

Tutu and Linzi are of Ewenki descent to whom nature is sacred. At the beginning of the film, we see Tutu kill a bear to save his brother, but not before the bear has killed their mother. Bears are sacred to the Ewenki people and the family must leave the forest. The killing of the bear seems to cast a shadow over both boys, as if they are cursed by what Tutu did.

They both fall for a widow, played by Qi Xi, who Linzi stumbles across when walking in the forest. Well, if we are more accurate, he gets caught in a trap set by the widow. The widow's first husband was killed by a bear. Both brothers fall for the widow, but she chooses Linzi. Tutu leaves the town.

The remainder of the story sees the fate of the three play out whilst the environmental damage gets worse. It is almost as if the health of the relationships is reflected in the health of the land. Linzi is drawn increasingly toward nature and protecting the forest, whilst Tutu gets involved in illegal logging. This is a film about choices and consequences, some of which are terrible.

The central performances are incredibly strong. Wang Chuanjan and Qi Xi in particular. Annoyingly IMDb provides poor information on a lot of non-Anglo films and I cannot find a full cast list. But the actor who plays Tutu and Linzi’s father is also worth mentioning.

But what really makes this film is the landscape and the weather. You can really feel the cold as they walk through the forest in winter. The ice, the snow, the misty breath of the people as they talk and that winter light that has a sharpness to it that summer light does not have. The sight of the forest in autumn with mile after mile of golden leaves stretching to the mountains that rise in the distance. There is a shot right at the end, which I assume used a drone, that sweeps down and across the sea of trees, which is magnificent. But Mark Kee Ping Bing, as Director of Photography, does a fantastic job. Some of the shots are like paintings, but there is also an ugly, dirty look when it is required.

The story breathes too. This is not a series of major incidents packed closely together. Sometimes the drama is at a domestic level. Sometimes at a larger one. There is a moment, near the films end, where Linzi looks like he is about to step up and be a hero fighting to save the forest, but that moment is stolen from him and turns in something much darker.

It is also an insight into a world that we are in danger of losing. You could make a similar film about logging in Canada, Brazil, or the United States of America. The rolling, ongoing destruction of the biosphere to feed an economic system that seems to embrace its own end: never mind the catastrophe, count the cash.

And it is not just the natural world that we are destroying, it is the human cultures that we swallow up at the same time. Imperialism has already played a part in this and now we seem determined to rid ourselves of difference in the name of efficiency. The Ewenki could be any number of peoples and tribes whose lifestyle and homelands are and have been swallowed up, see Rio Tinto’s destruction of the Juukan Gorge Caves in Australia as a more recent example.

So, Anima is a timely addition to this debate and from a source that, as a British person, you do not often get to hear from. I would love to see this on the big screen somewhere, as I think it would really benefit from that experience, but this is unlikely to happen outside a film festival or an art house cinema (excluding our current Covid related issues.) And that is a shame. A film like this deserves to be seen.