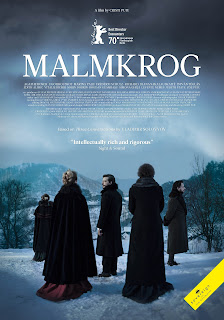 Promising to be "A challenging, rewarding and unique mixture of Downton Abbey and Dostoyefsky" watch the trailer for the historical drama Malmkrog, coming to Virtual Cinemas and VOD in March thanks to Sovereign Films...

Nikolai, a large landowner, a man of the world, places his country estate at the disposal of some friends, by organizing a sojourn at the spacious manor house. For the guests, among which we find a politician, a young countess, a Russian General and his wife, time passes at the manor house with rich meals, society games and by engaging in a long discussion about death and the Antichrist, progress and morality.
As the discussion gradually takes shape and the various topics are broached, each of them lays out his vision of the world, history, and religion. The hours pass, the discussion becomes more heated, the topics become more and more serious, and differences of culture and viewpoints grow increasingly apparent. Whether for good reason or not, the guests end up exacerbating each other’s anxieties to the point that their conversation begins to be sorely strained. Finally, falling into the snare of their own discourse and believing that history never repeats itself, none of them is able to realize the extent of the event in which they have unwittingly come to be trapped.

Picking up Best Director for Cristi Puiu in the new Encounters Awards at the 70th Berlin Film Festival last year, Malmkrog  also won Best Film and Best Screenplay at the 2020 Seville European Film Festival. Based on the work Three Conversations by Russian philosopher Vladimir Solovyov, Malmkrog is provocative, engrossing, and extremely timely filmmaking. Puiu, who won the Un Certain Regard Best Film award at Cannes in 2005, for The Death of Mr Lazarescu, cements his reputation here as one of Europe’s most accomplished and uncompromising directors.

Elegantly staged and beautifully acted, with first rate performances from an ensemble cast including Frédéric Schulz-Richard (Waiting For The Barbarians), Ugo Broussot (Territory of Love), Diana Sakalauskaité (Three Exercises of Interpretation), and Marina Palii (The Silver Forest), the film recalls the drawing room masterworks of Max Ophüls, and the stark cerebral work of Ingmar Bergman. As the guests ruminate at length, within the confines of an ornate 19th century manor house, the viewer is swept along with confounding opinions, prescient dilemmas, dazzling wordplay and unexpected clashes, all handled with absolute cinematic mastery by Puiu.