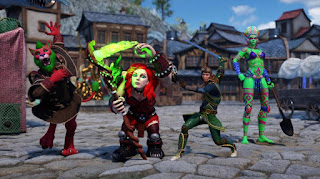 The new instalment has arrived. Ahead of the double bill premiere of Dead Pixels series two on Channel 4, read a short interview with Alexa Davies who plays Meg...

Press Release
Dead Pixels series two sees the arrival of a new instalment of Kingdom Scrolls for our gaming fanatics. But their excitement is quickly quashed when they discover that the game they love so much has been commercialised and overrun by a younger generation of players.

Meg starts to wonder whether it’s time for her to grow up and move on, Usman goes to increasing extremes to hide his gaming from his wife and Nicky falls for a girl online who he invites to come and stay.

Which definitely doesn’t cause any issues between him and Meg, because they definitely don’t have feelings for each other.

What was it like coming back to film series two?
It felt like we'd never left! Which was fantastic. The time has flown by for me personally between series one and two and on top of that we filmed most of the show on the set of the flat and stepping back onto it felt like coming home. I can't tell you how much I enjoy making this show, and so getting to return to it felt amazing.


What’s new for Meg in the show now?

When we return to the show eight months have passed, and it's fair to say that not much about Meg has changed. Throughout the series however she matures and is definitely more open to change this time around. Not completely open, let's not be crazy here, but a little more open to growing as a person.


The expansion pack has come out, but how does she feel about it, and what kind of challenges does she face?

She is incredibly excited to begin with, but only to begin with. Change is always going to be hard for Meg, especially when it comes to Kingdom Scrolls (as we saw at the end of series one) and Meg is not a fan of the changes they have made or the new gamers it brings. She has to learn to use the change to her advantage instead of just being angry at it.


What was it like to be back on set with Will and Charlotte?

It's just the best. They are amazing, I didn't think they could get any better from last series but somehow, they have. Dead Pixels is an incredibly demanding job in that we shoot six episodes in five weeks. Series two features more Alison, which means more scenes involving the three of us in the kitchen, which meant learning a lot of dialogue every day. I'm not quite sure how we did it, but I do remember laughing a lot in the process. This is easily the hardest job I have ever had but Will and Charlotte make it an incredibly enjoyable and rewarding experience.


We know you are a bit of a gamer, what games are playing at the moment? Did this help with research for series two?

I’m just trying to complete Link’s Awakening but it’s taking me forever. I’m considering playing both ‘The Last Of Us’ games again because they are just so fantastic. Being a bit of a gamer definitely helps. Playing is the easiest way to understand where Meg’s frustration comes from. It’s also just a dream come true that I get to play video games and call it research.


Videogaming is more popular than ever, with an even 50/50 split between genders. What do you think it is about videogaming that is so appealing and universal?

So many things. There are also so many different types of games these days that it's probably something different for everyone. For me, playing video games is very similar to reading a book or watching a film, except with a video game you become part of the narrative. The characters really start to mean something and returning to the game to play another chapter or two feels like popping another TV show on, but more much exciting. I recently played The Last of Us for the first time and the story is just so beautiful that you feel the need to play on and complete the levels to find out what happens to the characters. That's what it is for me anyway.


Was corpsing still a problem this time around?

Maybe even more so this time around. Jon Brown just writes the funniest lines and they're so difficult to say with a straight face, on top of that you have people like Charlotte and Will saying funny lines to you so brilliantly. There was even a moment this time around where we had to stop filming for a few minutes because Charlotte and I completely lost the plot over one of Will’s lines.


What can you tell us about the animation this series?

It's amazing! Honestly, I couldn't believe my eyes when I saw it. The expansion pack brings an upgrade and it's just magnificent. Greta and all of the other Avatars have little upgrades and they look brilliant. The work they do on the animation is amazing and I think it adds so much to show.

I am incredibly proud of series one and I was just so pleased people liked it. I fell in love with the show and with Meg when we did the pilot years ago and it's always scary when something you've put so much work into is put out there for all to judge. But it went really well, people liked it and critics were very kind. Luckily people liked it and we are back with more for them. I hope they love series two just as much.
Dead Pixels from the BAFTA award-winning writer Jon Brown returns to E4 on 26th Jan at 10pm. Every episode will also be available on All 4.
Images & info - Channel 4
Email ThisBlogThis!Share to TwitterShare to Facebook