Watching the Detectives – The Pembrokeshire Murders 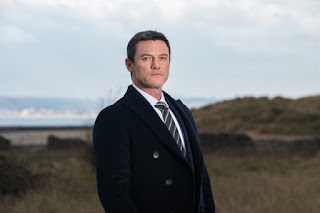 In a series of articles, Susan Omand and Steve Taylor-Bryant are going to remember the policemen, spies and criminal specialists that entertained them over the years. Today, Steve watches as Welsh police try and solve unsolved murders from the 1980s...

I like ITV Drama when it comes to true life crime stuff. They seem committed to the time slots that a story needs to play out, they seem committed to a budget that allows the filmmakers and writers to bring the best project they can to the screen, and they seem to know that not every cop show needs reels and reels of action and car chases. Sometimes it's about a conversation or a human moment and that is just as entertaining. With their latest instalment of true crime, they travel to South West Wales, Pembrokeshire, and follow Detective Superintendent Steve Wilkins as he reopens old cold cases nearly 30 years later.

The police do a grand job most of the time. Not all of their successes get even a news headline let alone a film or television series, but their failures are the stick with which the media beat them again and again. So, when Steve Wilkins moves back to Pembrokeshire after working elsewhere and wants to reopen three unsolved cases that had been devastatingly embarrassing to the police, you can imagine the resistance he felt long before you see the committee of his peers that are worried about the path he wants to go down try and talk him out of it. He eventually gets a small team and tiny budget for forensics and holes them away in a coastguard building where they can concentrate on these hideous crimes without the prying eyes of the media or fear of a leak from a copper embarrassed by their part in the original failures. The three crimes, a double murder followed by arson in the 1980’s, the unsolved Coastal Path murders, and the vicious attack, rape, and sexual assault of gunpoint of five teenagers in the mid 1990’s are the focus of Wilkins and his team as Wilkins is of the opinion that the perpetrator of all three awful attacks is just one man, a burglar named John Cooper who is up for parole after being sent to jail for burglaries within the same area as the attacks.

The case hinges on forensic evidence from items of clothing and weaponry from the archives. DNA evidence is a constant solve all in police dramas but in The Pembrokeshire Murders it is more realistic in that Wilkins and his team have a finite budget and cannot afford to test everything, so good old fashioned detection skills will have to be used, the media brought in as an ally, and some luck will also be needed along the way, including an episode of quiz and darts show Bullseye from the 1980’s. 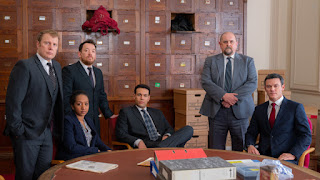 I like Luke Evans in things, he is one of the actors that is constantly impressive without being flashy. Here, as a real-life detective that was bringing some of the police’s most embarrassing and public failures back into the limelight Evans played the weight of that with aplomb. He played sensitivity, and the weight of pressure with a realism that allowed for the audience to fully immerse themselves in the story. Amongst his cohorts Alexandria Riley as DI Ella Richards really impressed for the same reasons as Evans but it was the villain of the piece and his hate filled son that stole the show for me. John Cooper, the Bullseye Killer, was played by Keith Allen who is hit and miss for me over the years but here just nailed the arrogance and hidden evil and it was probably the performance of Allen’s career overshadowed just slightly by Oliver Ryan who played the Cooper’s estranged son. Cooper junior had a horrendous life after abuse by John Cooper as a child and was still suffering the physical and mental aspects of that abuse when his father’s crimes are brought back into his life. Ryan was stunning playing both the body and brain pain with a level of realism that many actors never achieve.

From top to bottom the casting is perfect and complements some excellent writing from Jonathan Hill, Nick Stevens and Steve Wilkins' book on the investigation. There is nothing flashy, or exciting about The Pembrokeshire Murders in an action respect but, as good solid human drama, ITV has once again knocked it out of the park. The direction from Marc Evans and the cinematography from Baz Irvine, together with the beautiful landscape of the Pembrokeshire coast, just added a layer of enjoyment to things that were already pretty stunning.
Follow Steve on Twitter @STBwrites
Images - ITV
The Pembrokeshire Murders is currently available on ITV Hub and coming to Britbox on 13th February.
Email ThisBlogThis!Share to TwitterShare to Facebook