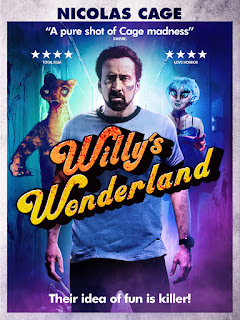 Roll up, roll up as Ren Zelen gives a tour of Willy’s Wonderland, out now from Signature Entertainment...

Willy’s Wonderland must have been a walk in the park for Nicolas Cage, the kind of film he could make in his sleep, and this time he didn’t even have to learn any dialogue, he could just be…him.

That’s not to say the film isn’t a lot of fun, it certainly is, unless you are tired of seeing Nic Cage get crazy, but as the old film saying goes, ‘If your tired of Crazy Nic, you’re tired of life’ (well, it’s a saying in my house).

At the start of Willy’s Wonderland Nicolas Cage’s nameless character is hurtling down the road in his muscle car when his tyres suddenly get blown out. He gets picked up by the car repair service from a nearby small town and told the repairs will cost a thousand dollars, but they don’t take credit cards…and none of the ATMs work. Inevitably, Cage’s character is unable to pay in cash, so the mechanic suggests he could work off the amount by taking on a job locally, nothing too difficult, just an overnight cleaning task.

Stetson wearing, cowboy booted, moustache twiddling Tex Macadooa (Ric Reitz) is the man who offers Cage’s character a deal. Tex owns a disused amusement arcade and restaurant called ‘Willy’s Wonderland’ which is in dire need of a good clean up. If Cage agrees to be the ‘Janitor’ for one night, Tex will take care of the repair bill and have ‘the Janitor’s’ car outside, fixed and ready for collection, by the morning. It all seems simple enough, so Cage, a man of few words (no words actually) agrees to be the overnight ‘Janitor’.

Of course, the whole thing is a not-so-elaborate trap. Willy's Wonderland carries a dark secret that The Janitor is about to discover - the place is infested by giant, cartoonish, animatronic creatures, possessed by the spirits of sadistic killers keen to slaughter any who trespass there - and the people of this hick town have made a deal which involves luring in random strangers for a sacrifice, rather than offering any their own kin.

So begins a tough night shift for our protagonist, as he finds himself fighting for survival against a pack of demonic animatronics. His task is made all the more complicated when a group of local teens, led by the feisty Liv (Emily Tosta), decide that the evil place needs to be burned to the ground.

The Janitor is forced to fight his way from one monster to another, trying to survive until morning, but what the craven townspeople didn’t bargain for is that "The Janitor doesn't play nice." 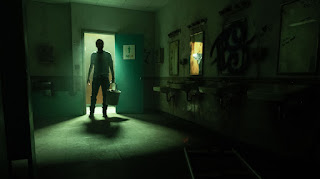 Turns out that ‘The Janitor’ has his own set of priorities. First of all, he is serious about the job in hand. He is such an assiduous cleaner I found myself wishing he would come and get to work on my house. He’s determined to get the dilapidated amusement arcade spick and span. Secondly, he is rigorous in taking his allocated breaks. He has a timer on his watch which sounds an alarm whenever it’s break time, and nothing interferes with that.

In fact, nothing interferes with his routine or with the job in hand, not a bunch of evil, bloodthirsty animatronics, nor a bunch of ‘meddling kids’. The Janitor has a job to do and he’s doing it. There follows a night of Cage relentlessly beating the living daylights out of some genuinely creepy stuffed animals, covered in black oil that spurts from their flailing bodies.

Director Kevin Lewis manages to make the film sufficiently gory while throwing in some goofy laughs. Everything from Cage’s muscle car and leather jacket, to the’ funhouse slasher’ premise, indicates a typical grindhouse movie, with the ‘blood’ shown on screen here coming as much from the black oil spurting from messily dismembered mechanical robots as from butchered teens.

The Janitor, despite being the recipient of some vicious slashing himself, always manages to patch himself back up with some handy duct tape – it has a hundred uses. Of course, any ‘slasher’ movie where Cage and some teens are being attacked by mechanical animals, and which sees his character taking breaks during the bloody mayhem to drink power sodas and play pinball, isn’t taking itself too seriously.

Willy’s Wonderland is entirely Cage’s vehicle - it simply wouldn’t work in the same way with another actor - it would be too silly, or not disturbing enough. Cage plays it absolutely straight, but it also works as a knowing send-up of his unique reputation as a cinematic oddball. The film simply adds to Nic Cage’s career renaissance - a CV chock full of strange horror film choices in which he gives the kind of wild and crazy performance that apparently only he can pull off so entertainingly. Willy’s Wonderland is merely the latest film that has added the adjective of ‘CageRage’ to my cinematic vocabulary.