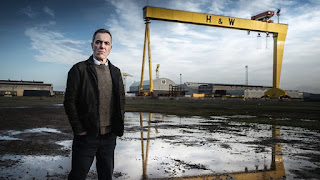 Bloodlands is a major new original crime drama coming soon to BBC One. Find out more in this introduction to the series by its writer Chris Brandon and read a short Q&A with its star, James Nesbitt...

When a car containing a possible suicide note is pulled out of Strangford Lough, DCI Tom Brannick (James Nesbitt - The Missing, Cold Feet) quickly connects it to an infamous cold case with enormous personal significance. Bloodlands follows his dogged hunt for a legendary assassin, an explosive cat-and-mouse game where the stakes have never been higher.

Bloodlands is Chris Brandon’s first original drama series commission and the first drama from newly performed production company HTM Television which is co-owned by Jed Mercurio (Bodyguard, Line Of Duty), who is also one of the executive producers in the series, and Hat Trick Productions.
Chris Brandon explains some more about the background to the story:

"Bloodlands is a thriller about fictional detective Tom Brannick, who is forced to grapple with his past when he is sent on the hunt for a mythical assassin. His journey asks the universal questions of what we will do to protect the ones we love, and how far will we go to achieve that end.

"The idea comes from a distinct sense of place.

"I spent part of my life growing up in Strangford, a small village at the mouth of a lough in Northern Ireland. It’s a place that always sparked my imagination. The austere beauty of scarred and sodden hillsides, the windswept islands and bouldered shorelines always seemed, in themselves, to hold the memory of stories past.

"In 2013, I returned to help a childhood friend make a short film. The film was set in the house next door to where I grew up and my own memories of the land and its people came flooding back. It was then that the idea occurred to me to tell the story of someone whose journey is inextricably linked to that of the land - a kind of allegory, if you will, about the moment Northern Ireland finds itself in now.

"It is 23 years since the Good Friday Agreement which signalled the end of the violence of the Troubles, a 30-year period of sustained bloodshed. I was a child of the 80s and 90s, when such violence was part of the day to day. The Northern Ireland we know now is a country that is mostly at peace and one that looks forward with hope.

"But the foundations of peace are delicate. The legacy of violence has left indelible scars. How Northern Ireland moves forward depends very much on how it deals with its past. Many feel there may be peace but there is still injustice. Many question how there can be reconciliation without truth.

"These struggles exist in Tom Brannick. As a veteran detective he has a foot in both the past and the present. He has hope for the future in the potential of his daughter, but he is stopped from moving forward by the resurrection of an assassin myth; a symbol of police collusion in past violence that holds deeply personal significance.

"Tom must cut out the root of this myth in order to have any hope of a peaceful tomorrow. He must confront his past to protect the future he prizes above all.

"I knew he would be the character through whom the story of Bloodlands was told.

"I wrote a speculative screenplay and was delighted when my agent brought it to the attention of Jed Mercurio. His experience of working in Northern Ireland, while filming Line Of Duty, gave him an intimate knowledge of the place I was writing about. His knowledge of the thriller genre was something I was already aware of as an avid follower of his work, and it has been a great privilege to discuss the intricacies of story with him.

"Together with executive producer Mark Redhead, whose own experience of working in Northern Ireland, on projects such as Bloody Sunday, had given him an exhaustive knowledge of the Troubles, we were able to collaborate on building a storyline across four hours that could be both a thrilling and resonant drama.

"James Nesbitt’s involvement from early on and his belief in the project marked the coming together of something very special. He is a much loved son of Northern Ireland, and has those rare and timeless qualities of the everyman that allow him to take an audience by the hand and lead us into perilous territory, whilst always maintaining our trust.

"It is James’ portrayal of a tormented Tom Brannick that brings the character and this world to life as he balances the visceral and psychological in a mesmerising central performance." 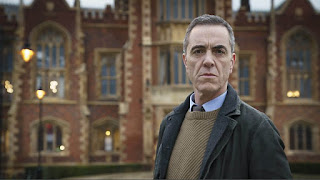 Tell us how you got involved with the project.

I first met Jed Mercurio years ago when I was doing Jekyll and I’ve always liked his work. When he was doing Line Of Duty in Northern Ireland, I would say to him, "why am I not in that?" but he’d say, "we’ll find something".

Then a couple of years ago, he showed me a script written by Chris Brandon, it was a real thriller and his first commission for his independent film company. It had Jimmy Mulville and Mark Redhead attached, who I had worked with before on The Secret and Bloody Sunday, and Pete Travis who directed me years ago on Cold Feet. So, it felt like familiar ground with people I really respected, and it was such a perfect fit going back to Northern Ireland, doing something contemporary and brilliantly written.

I was also attracted to Bloodlands because of my involvement with a charity called Wave, and its work with victims and survivors over the years.

Tell us about DI Tom Brannick.

Tom Brannick has been a policeman for over 20 years. He started out when it was the RUC that transformed to the PSNI and would have been there when peace came to Northern Ireland with the Good Friday Agreement. He’s a decent man, someone who has known real tragedy during the Troubles. When the name ‘Goliath’ comes up, an assassin possibly in the police force, we find out that one of the victims was his wife, Emma.

Tom is devoted to his daughter, Issy, he is very protective over her. He was a well known character because he played rugby. He’s quite familiar to me, because I knew a lot of police officers when I was younger and my family was in the police and also I played rugby at school and followed rugby a lot, so it was familiar territory. I think as he’s coming to the end of his career, the idea of this old case rearing its head again is terrifying to him and everyone in the force - lots of suspicions, paranoia - and there’s great danger of what this means for the peace process.

You’ve filmed in Belfast many times in the past, how has filming in Belfast changed over the years?

Belfast is an exciting, wonderful, vibrant place, it’s a cosmopolitan place, but it also bears the hallmarks of a place that went through the Troubles. The last number of years has seen Belfast really emerge since the Troubles and because of the success of the film industry there, it’s had a boost for tourism too.

It was great to film there because Northern Ireland Screen make it so easy. There have always been great film crews and studios and within 20 miles there’s seaside and urban landscapes.

There’s a lot of crime dramas out there at the moment, what do you think sets Bloodlands apart?

I think it really helps to have the team we’ve got on board. We’re seeing Belfast in a new context, we’re seeing a more contemporary city. It is a cat-and-mouse thriller but the fact that it has the legacy of the Troubles brings an added depth to it. It’s also a story about a father and daughter, and of loss, so there are real human stories attached to it. At its key it’s really about relationships, I think it’s something that audiences will invest in, invest in the characters.

But also, it is a classic Jed Mercurio thriller, where you’re not really sure what’s going on, with many different stories interwoven into it. I think it will keep viewers on the edge of their seats.

Did you do anything to prepare for the role?

I spoke to a few policemen that I know about what it was like during the Troubles. We had a police advisor on set, who was great, just in terms of technical things; the way you communicate with people, the relationships that you have, the attention to detail, particularly worrying about the constant threat from paramilitaries. But also, so much of it was already imbued in me.

Could you talk about your working relationship with Jed and Chris?

It was incredibly collaborative, we were constantly fine-tuning things, it was a wonderful relationship. I could phone them at any time, we would just dissect and analyse the scripts. It was certainly one of the most challenging but satisfying jobs of my career.

Did you find any scenes particularly challenging or memorable to film?

It was incredibly cold, particularly when we had to go down to the islands of Strangford Lough. We’d be transporting crew, equipment, food, toilets, to these remote islands and it was bitterly cold, the wind really comes and cuts you through to the bone. At times it was hard to speak, my mouth would be paralysed and I just couldn’t get my jaw moving. The privilege of the job is the hardness of it sometimes, because that’s what you want to do, that’s why you go into acting. It was challenging but fabulous.
Images & all info - BBC
Email ThisBlogThis!Share to TwitterShare to Facebook