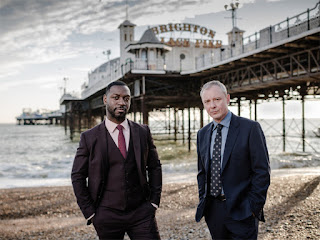 With the series entitled simply Grace, the first two hour long screenplay is based on the first of the Roy Grace novels, Dead Simple, and introduces the Brighton based Detective Superintendent Roy Grace, played by John Simm, a hard-working police officer who has given his life to the job.

Co-produced by Second Act Productions, Tall Story Pictures and Vaudeville Productions, the drama opens with Grace’s career at rock bottom. He’s fixated by the disappearance of his beloved wife, Sandy, which haunts his thoughts. He’s in the last chance saloon running enquiries into long forgotten cold cases with little prospect of success. Following another reprimand for his unorthodox police methods, Grace is walking a career tightrope and risks being moved from the job he loves most.

With so much at stake, his colleague Detective Sergeant Glenn Branson, played by Richie Campbell, knows he has more to give and asks him for help with a case.
When a stag night prank appears to go wrong and the groom goes missing, Branson calls upon Grace to unravel events that led to the mysterious disappearance three days before his wedding to his beautiful fiancée.

A successful property developer with everything to live for, there is no trace of the missing groom. Is this a case of stag night shenanigans gone badly awry? Or is this something more sinister?

With nothing but instinct, a lingering suspicion and his obsessive nature, Grace doggedly pursues the groom’s disappearance and becomes uneasily close to the bride to be….
Author Peter James is best known for his fast-paced and gripping stories that thrust regular people into extraordinary situations. He has proven himself to be one of the world’s most successful writers, delivering number one bestsellers time and time again. His Superintendent Roy Grace books have been translated into 37 languages with worldwide sales of over 21 million copies and 17 number one Sunday Times Bestsellers. His last Roy Grace novel, Find Them Dead spent 7 weeks at number one in 2020. 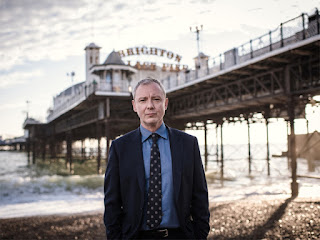 Here's the interview with John Sim

What appealed to you about both Grace and the title role?

“It would have been crazy for me to turn down such a brilliant opportunity to play a lead for ITV in a best-selling detective series. It is just such a great part. I was doing Macbeth in Chichester when I got the call. My agent said, ‘Have you read these Peter James’ books?’ I had heard of them, but not read any.

“I immediately bought the first two novels and I couldn’t put them down so I knew what a fantastic role it would be to play. I’m a voracious reader, but had never read a lot of crime fiction before. Once I started reading Peter James' novels I couldn’t stop, I’m currently on book ten. They are very clever and Peter is brilliant at what he does.

“My father-in-law was a policeman in the Met Police for thirty odd years. He read the first few and was very complimentary about the procedural stuff that’s in there. He said it was rare for an author to get it absolutely bang on. I think Peter prides himself in that, he’s a very clever writer and they are an addictive series of books.

“Peter and I were going to meet up before the pandemic came along, and we have spoken a number of times and we email each other. If I had any questions or queries during filming I would fire off an email and he would come back immediately. It’s just such a shame we haven’t been able to meet in person yet, but I look forward to the day when we can.”


Who is Det Supt Roy Grace?

“Roy Grace is a high ranking detective. When we first meet him he has been diverted to investigate cold cases where his career is stagnating. Then his friend DS Glenn Branson (Richie Campbell) asks for his help on a case he is working on.

“Branson takes a big risk bringing Grace back into the fold to help on the first case. He does it because Grace is really good at his job and has been his mentor in a way. But also they are best friends and Branson can’t stand to see Grace wallowing in this dead end job after his wife went missing. Grace’s wife has gone missing some years before this and he hasn’t been able to solve the mystery of what has happened to her. Branson gives him a lot of leeway, and is trying to help out his friend, whilst also needing his friend’s help. It’s a mutually beneficial situation.

“There are seventeen Roy Grace novels so far and the wonderful thing was that Peter James said he was writing the new ones with me in his head this time which is great. He is a prolific writer. I just hope people like what we have done and we get to do some more.” 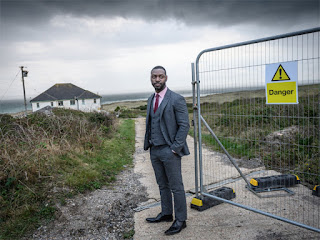 Did it take time for your screen relationship with Richie Campbell to develop?

“Richie and I got on really well right from the start. It was difficult because filming was due to begin in the spring of 2020, but had to be postponed because of the pandemic. So we were waiting for several months before getting the go ahead to start work and it was then a very different experience. When I met Richie at the script read through we both had masks on. The whole thing was very surreal, but we were all so grateful to be working.

“Richie and I hit it off immediately which is really lucky, chemistry is a really big deal. As with working with Philip Glenister on Life on Mars - if you get it right, you get a lot for nothing.”


Why does Roy Grace consult a medium?

“Grace went to the medium Harry Frame out of desperation after his wife disappeared because he had tried everything else to find her. He and Harry are old friends in any event. He contacted him again subsequently about a case on the off chance, and he came through.

“Grace views it as a resource he has in his back pocket. He might not need it but if everything else fails, why not use it? It’s up to the police to explore every sort of opportunity and avenue available and not to be narrow minded about it. I think he’s up for anything that will help him solve a case.

“In the books Grace and his boss, Assistant Chief Constable Alison Vosper, are at loggerheads all of the time. It’s slightly different in this adaptation, she is not his enemy. Vosper, played by Rakie Ayola, tries to help Grace out and gives him some degree of freedom.” 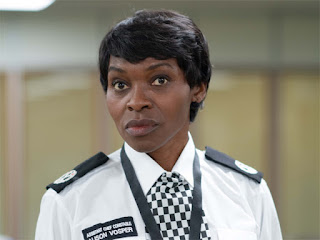 In terms of diversity does Grace show progress has been made in recent years?

“It’s a no brainer. There should be equal opportunities all the way across the board. It should have happened many years ago. The Personal History of David Copperfield written and directed by Armando Iannucci, that is how things should be. It’s a shining beacon of how we should be casting.”
How are some of the darker moments in these stories portrayed on screen?

“The second script involves a dark subject matter. But often with these things it’s what you don’t see. The reaction you get from the faces of people who have seen it is often even more frightening. In this day and age things on screen can be so graphic. What is there to film that we haven’t seen? I don’t particularly like watching horror films and things like that. I think people are numb to it now. Your imagination is far scarier than anything else. You can show horrors without showing the actual horror itself.”


What was it like working on these scripts written by Russell Lewis?

“Russell Lewis is a brilliant screenwriter, I am a big fan of his work. I am completely addicted to Endeavour, which he also wrote for the screen. I had seen the odd episode because I loved Morse, but during lockdown I decided to watch it from beginning to end. I absolutely love it.”


What does the main setting of Brighton bring to Grace?

“I knew Brighton fairly well before this because we’d visited many times. I’ve always loved Brighton and it was a lovely place to film. It’s a beautiful place which we see in these films, but Peter James also shows us a dark underbelly in his novels.” 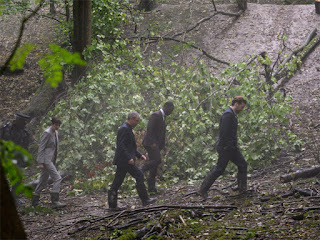 What were your thoughts when the start of filming was postponed by the first national lockdown in the spring of 2020?

“I was terrified we might not be able to film it at all. We really thought it was in jeopardy. We were thrilled when we got a starting date in the autumn and also thrilled to get through the shoot without any mishaps, nobody caught Covid. We were very careful and the people in charge of all of that did an incredible job. Everybody did what they had to do and we somehow got through a 10-week shoot without having to close down once.”

“You do get used to it. As actors we drew the long straw because we didn’t have to wear masks all of the time. Every time you looked up it was like being in an operating theatre. Our directors, John Alexander and Julia Ford, directed the whole time with a mask and a shield on, everybody wore them all the time.

“It was very strange and there were a lot of sacrifices that had to be made, but everybody was happy to do it, and they deserve a lot of credit for doing it so well. It’s an enormous achievement.”