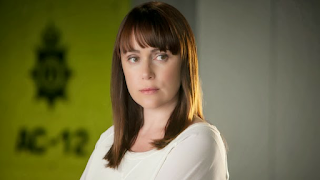 With Line of Duty series 2 returning to BBC screens this Saturday, a reminder from a few years back of the time that an over-excited Steve Taylor-Bryant got an exclusive interview with Keeley Hawes...

It's not often I get allowed to talk to important people and most so-called famous people I have interacted with have been less than impressive.

However, huge excitement filled me after a cheeky request for an interview via Twitter led to a phone call with television's golden girl of the moment, Line of Duty's Keeley Hawes. I have been a massive fan of Keeley's for a long time. Spooks and Ashes to Ashes were compelling television, Tipping the Velvet had me blushing and giggling like an adolescent schoolboy and Line of Duty has me second guessing family and friends as I'm not sure I can read anyone anymore.

I started our conversation by apologising in advance for any fanboy moments and promising that lawyers won't need restraining orders, which was taken with great humour and I instantly felt at ease. Things were going well. Would they continue this way during the questioning? Would I keep my promise of behaving?

“I have to start by saying MASSIVE CONGRATULATIONS on Line of Duty, it really is fantastic television. Denton is a strange character, very dark, and incredibly hard to work out. How do you get into the frame of mind to play Denton with that confusion of good or evil?

It's an odd one really. It was the longest I had been away from my family, Matthew and the children, and it was long shoot in Belfast. I found it to be very physical and, instead of going out every night, I stayed in the hotel immersing myself in the script. A lot of the characteristics were in the script, so the emotions of being away and the intensity of the shoot, along with Jed's superb script, allowed me to give as much as I could whilst using my energy to get ahead. Douglas McKinnon and Jed Mercurio were on set the entire time to help out and answer any questions and that was a great experience. They are both very generous and Jed was there every step of the way.

Jed Mercurio is a top notch writer and British Television is lucky having the likes of Jed and Neil Cross. Is there a particular writer you really want to work with?

I have been really blessed to work with some outstanding writers already. Matthew Graham and Ashley Pharoah on Ashes to Ashes were superb. Jed Mercurio is so very generous. He made himself available all the time and that was a new experience for me, he really is a one off and I would absolutely work with him again. I agree we are in a rich time for British writers at the moment. 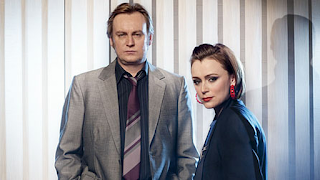 I don't mean for this to sound derogatory but you are often listed as 'Support Cast' and yet you more than held your own against Philip Glenister, and often stole scenes in Spooks. Was this intentional on your part or in the writing?

In Ashes to Ashes the writers gave me such a wonderful character to play and most of scenes were with Philip so it was very even. Spooks, yes, whilst Peter Firth (Harry Pearce, Head of MI-5) and Matthew (Macfadyen, husband and Tom Quinn in the show) were seen as the series leaders, it felt at the time a lot more like a three hander and, after Matthew left, later in the run, it became about Rupert Penry-Jones, who was just so wonderful in the role of Adam (Carter, lead Agent MI-5). There is word going around that there may well be a Spooks movie in the works and, since my character (Zoe Reynolds) is one of the only ones left alive, perhaps there could even be a comeback for Zoe.
You have also conquered the gaming world and I was asked to mention Lara Croft to you. How did you go about preparing for a voice role on a franchise like Tomb Raider?

It was amazing. I never saw any visuals which was different, it was all just me acting into a microphone. It was an incredible experience and the fans I met were so passionate. I was always being approached and received so many nice comments from them all, it really is a big deal for me and to know you have pleased the fans like that, but the creators were right to change it and freshen it up.
I shall finish with a couple of quicker questions if that's ok? I recently imagined a whole new cast for Blake's 7 and gave you the role of telepathic guerrilla fighter Cally. Is Sc-Fi something you would be interested in doing?

I LOVE SCI-FI! I read your Blake's 7 piece but had beaten you to it as I did Blake's 7 on audio with Colin Salmon a while back (as Anna in Eye of the Machine). I would absolutely do more Sci-Fi.

And finally, if you had my power and could cast yourself as anyone from anything who would it be?

OOH great question. I can't answer it without some thought. Can I let you know on Twitter DM?

I, of course, said yes and the interview was over. Keeley also asked after my family and we talked about our children, she was amazed I have five, spoke beautifully of her three and promised to get me the answer to the last question.

I add the bit at the end about the chat on our children and family and the like because, normally, when we interview stars they are all business. At no point was I given the feeling that talking to me was beneath her or an inconvenience. Keeley Hawes had not just made my week but gave me some confidence that there will be more famous people that are genuinely lovely.

Oh, yes, nearly forgot. A couple of days later, Keeley kept her promise and answered my final question via Twitter DM. An answer I can really see, a character that could have been written for Keeley Hawes in another generation...

“Hi! Best I could do – Sue Ellen! Linda Gray was so fabulous”

[Line Of Duty series two makes its BBC One debut from this Saturday at 9pm, when the channel gives new and existing fans the chance to watch AC-12’s second televised case. All five series are also available to stream exclusively in the UK on BBC iPlayer. - Ed]

Pictures courtesy of BBC
Email ThisBlogThis!Share to TwitterShare to Facebook