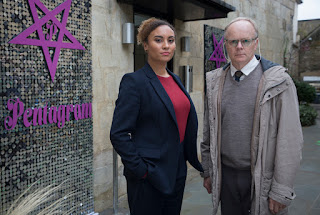 Ahead of a new series of films for detectives McDonald & Dodds, who return to ITV screens on Sunday, 28th February, read an interview with the show's creator Robert Murphy...
Press Release

The new series of McDonald & Dodds sees Tala Gouveia and BAFTA award winning actor Jason Watkins reprise their roles as the smart and ambitious DCI McDonald and the humble and quietly brilliant DS Dodds in three new murder mysteries joined, as before, by a host of well known faces as guest stars.
They are joined in the first film by guest cast members Rob Brydon, Rupert Graves, Martin Kemp, Patsy Kensit and Cathy Tyson. Shelley Conn, Natalie Gumede, Sharon Rooney and John Thomson join the second film and Saira Choudhry, Rosie Day, Nitin Ganatra, Nicholas Goh, Siobhan Hewlett, Sarah Parish and Rhashan Stone guest star in the third film.
Returning cast includes James Murray as Chief Superintendent Houseman, Jack Riddiford as DC Darren Craig with Lily Sacofsky joining as DC Milena Pachiorkowski.
Set in picturesque Bath, the series pairs feisty DCI McDonald, who has recently transferred from London’s Met Police, with the unassuming DS Dodds, who has been happily in the background for most of his working life. To McDonald’s surprise they form an unexpectedly effective crime solving partnership.
The first film of the new series, which airs on Sunday 28th is The Man Who Wasn’t There. 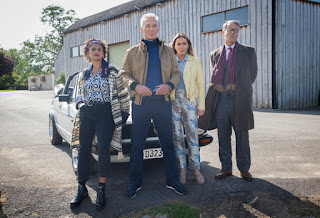 Barbara (Patsy Kensit), Mick (Martin Kemp), Gordon (Rupert Graves) and Jackie (Cathy Tyson) were rising stars in the 1980s who went on to have high profile careers. Now living in Bath together, there are secrets from the past which could threaten their comfortable existences… On a surprise day out, the four friends are joined by their other housemate Frankie (Vince Leigh) on a surprise hot air balloon trip. As they ascend above beautiful Bath, disaster strikes and suddenly the balloon lurches out of control. Panic rises and as the basket strains under the weight of the group, it dawns on them that they can’t all survive. As the balloon crash lands onto the meadow in Bath’s Royal Crescent, it’s revealed that Frankie is not there – has he died in the ultimate act of sacrifice for his friends, or was he pushed?
Arriving on the scene, DCI McDonald and DS Dodds are joined by Roy Gilbert (Rob Brydon) from the Air Accident Investigation Branch. Roy sets to work, investigating the accident with as much precision as Dodds but McDonald finds her new co-worker a difficult and unwelcome addition to the team. Under Chief Supt Houseman’s ever critical glare, the pressure mounts on McDonald and Dodds to uncover what really happened up in the sky. As the suspects weave a web of half-truths and misdirections around McDonald, Dodds is drawn into a game of cat and mouse. But who is puling the strings? Following a near death experience, McDonald and Dodds are finally able to lay to rest the ghosts from the past.
Robert Murphy, creator and executive producer, wrote the first two films with Kam Odedra (Gangs of London) writing the third. Directors were Alex Pillai (Chilling Adventures of Sabrina), Rebecca Rycroft (Malory Towers) and Ian Aryeh (In The Long Run). McDonald & Dodds was filmed in the West Country.

Following the success of series one, what did you want to achieve when you set out to write the second series?

“We just tried to make it an even better version of itself! We didn’t want to overhaul it, we just wanted to make it a bit bigger in scope and see how far we could push it with some even more ‘twisty turny’ cat and mouse detective stories – I really like the sense in this show that our two detectives are being toyed with by the ‘nemesis of the week’. Jason and Tala are now so settled into their roles and it’s a real joy to write with them in mind.


Are there any new recurring characters in series two?

“We have a new recurring character on the police team. DC Milena Paciorkowski is played by Lily Sacofsky, and when we meet her, she’s a bit of an outsider. She’s quite reserved and focused on the job. She doesn’t draw too much attention to herself, she is a lowkey, modest character, but she captures the attention of one of her colleagues, so there is a bit of romance there. “We wanted to introduce a Polish officer, because we tried to reflect contemporary Britain. The characters we come across try and reflect the world we are in.”


What’s the secret to the show’s success?

“The central pairing, that duo, is everything. We have two actors who can really run the gamut between the serious and the comic. You can write it as best you can, and direct it as best you can, but it does stand or fall on the casting and the actors being able to deliver it. Jason and Tala are two smart, intelligent funny actors who have obviously formed a bit of a bond and have great on screen chemistry.”


Where do you get the ideas for the outlandish murders?

“It’s really fun casting the guest stars too. In episode one, for example, because the characters are all 80s icons, I wanted to cast actors who were also big in the 80s, which is why we went for Martin Kemp, Patsy Kensit, Cathy Tyson and Rupert Graves. It was also a great laugh writing for Rob Brydon in that same story, as he can make just about anything funny. If anything the challenge was reining in the writing slightly when we wanted to do the serious bits.” 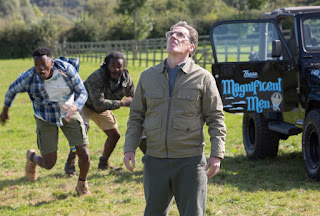 We never see McDonald and Dodds’ private lives, even in series two. Why did you make the choice never to follow them home?

“Well, never say never, but that’s just my preference to stay out in the field with them. For it to be interesting when they go home, it has to be dysfunctional, and then it goes into that whole tortured detective vein. The thing with McDonald and Dodds is that there is no big traumatic backstory for either of them, they’re actually quite happy.

“We do refer quite a lot to McDonald’s boyfriend, but you never see him, so I always think he is like the equivalent of Mrs Columbo in Columbo. Like her, he’s a character you only hear about and imagine what he might be like.”


While you don’t focus on the pandemic in this series, COVID is given a passing mention in a few of the episodes. What was the thinking behind that?

“I wrote series two in summer 2020, so at the time I didn’t know what situation we would be in when it aired, but I did know it would still be very much part of the landscape and people wouldn’t have forgotten about it. I wanted to do it in a light way. In episode two, COVID is used in the investigation, it becomes a clue at one point.

“I also thought about how people’s language has changed since I wrote series one. For example, the word ‘isolation’ means something different to what it meant pre-COVID. So I just thought, let’s not ignore the pandemic entirely, but at the same time this is still escapism. You don’t want to see everyone walking around in masks.”


Why do we never learn Dodds’ first name?

“I might reveal it in the very last episode, if it ever comes up! The truth is, I don’t actually know what his first name is. I just decided not to give him a first name as I like a bit of mystery around him. I like keeping some things back so that the more you have to imagine about him, the more intriguing he becomes.”


Are you already working on ideas for a potential third series?

“We are talking and kicking around ideas. Whether it will happen or not, we don’t know as yet, but we need to get moving to be able to shoot in the summer, as the show is quite summery in its look. I do think the show could run and run, but that is a question for Jason and Tala as their characters’ names are in the title. As long as they are still keen, I am sure the ideas will keep coming.”

McDonald & Dodds series 2 starts on ITV on Sunday 28th February and both Series 1 and 2 will be available through the ITV Hub.
Images & info - ITV
Email ThisBlogThis!Share to TwitterShare to Facebook