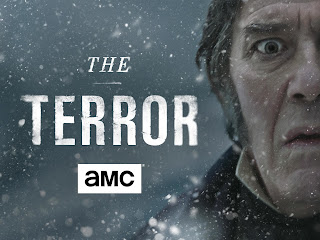 From executive producer Ridley Scott comes the true story 170 years in the making; The Terror is coming soon to BBC Two and iPlayer...

The 10 one-hour episode anthology series is inspired by true events and is a fictionalised account, based on the novel of the same name by Dan Simmons, of Captain Sir John Franklin’s lost expedition to the Arctic.
In season one, horror strikes on the Royal Navy’s perilous voyage into unchartered territory as the crew attempts to discover the Northwest Passage. Faced with treacherous conditions, limited resources, dwindling hope and fear of the unknown, the crew is pushed to the brink of extinction.

Frozen, isolated and stuck at the end of the earth, The Terror highlights all that can go wrong when a group of men, desperate to survive, struggle not only with the elements, but with each other.

Sue Deeks, Head of BBC Programme Acquisitions, says: “The Terror is an atmospheric, character-driven drama, full of menace and foreboding, which will thrill and chill BBC viewers all the way to its icy denouement.”
“The Terror captures a rare combination of fascinating history, complex and flawed characters, the inextinguishable human spirit and the horror and promise of an uncharted world,” added executive producers and co-showrunners David Kajganich and Soo Hugh.
Previously shown on AMC in the US, here's a look at the trailer for season one

Season one of The Terror is Executive Produced by Ridley Scott/Scott Free Productions and the Executive Producers and Showrunners are David Kajganich (True Story, A Bigger Splash) and Soo Hugh (The Whispers, The Killing).
Image - AMC, info - BBC
The DVD and Blu-ray come out in the UK on June 28th, the book is available now.
Email ThisBlogThis!Share to TwitterShare to Facebook