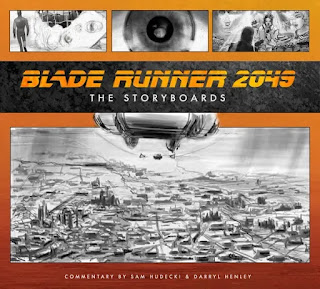 Proving that she's not a robot, Susan Omand read Blade Runner 2049: The Storyboards by Sam Hudecki and Darryl Henley, out next week from Titan Books...

As the title of the book suggests, Blade Runner 2049: The Storyboards shines a light on one of the often more hidden/misunderstood elements of film concept art – the storyboards. Storyboards are, to quote director Denis Villeneuve in his Foreword to this book, “a guideline to figuring out how to shoot a movie.” They turn dreaming into doing, ideas into reality, putting down on paper the movement of actors and cameras within scenes and how that action flows from one location to the next to ensure that the film in the director’s head gets out and is more shareable with the rest of the production team. For Blade Runner 2049, Villeneuve and his Director of Photography, the genius that is Roger Deakins, with extra input from the Production Designer, Dennis Gassner, sat down with two artists, Sam Hudecki and Darryl Henley, to “capture the visual essence of what the movie would become.”

It is the work of those two artists that is showcased throughout this book. You can tell from their own introduction pages how much working on something as iconic as the Blade Runner franchise, and with Villeneuve and Deakins, meant to both of them and that close connection with the film really comes through in their artwork. Hudecki explains their work process in the next short chapter and highlights the synergy needed to be able to capture those visions and ideas as they grew out of the roundtable sessions. The rest of the book then takes you almost scene by scene through the film in storyboard format with commentary from both Hudecki and Henley and it really does give you a sense of the film itself, the pacing, the important shots, all told by these painted aides memoires.

As with every “Art of” book produced by Titan Books, it is a thing of beauty as well as being packed with information. Yes, all the storyboards are all relatively quick panel sketches in mostly black and white, almost like a comic. Weighing in at a hefty 220-odd pages of nearly a foot square in size (it’s a gorgeous big hardback), there are LOADS of these to look through combined with, every now and then, a page of film concept art, bright with colour and detail, by a different artist involved in the film process, which serves to attract the eye and refocus the attention. Most of the pages also have a little bit of writing on them too, always relevant to the storyboards in question, either a comment from Hudecki or Henley (always written in blue or orange respectively which I thought was a nice touch) or a few lines of scene description from the screenplay itself and, now and again, an origami animal wanders along the bottom of the page. It’s these tiny details that really make a book like this special for me and it’s something that Titan Books are so good at.