Book - The Little Sleep and No Sleep Till Wonderland 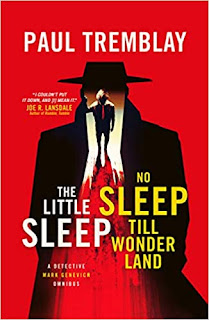 Titan Books announce the publication in April of the omnibus edition of The Little Sleep and No Sleep Till Wonderland by Paul Tremblay...

Since the publication of his award-winning novel A Head Full of Ghosts author Paul Tremblay has been cited as one of the key voices in the new wave of horror reinventing the genre. Known for his subversion of the rules of the genre and deeply human portrayals of people and families in crisis he quickly gained a fan following for his inventive and gripping narratives, including among legends of the scene such as Stephen King who described his recent collection Growing Things and Other Stories as “one of the best collections of the 21st century.”

But before he became known for his horror fiction Tremblay published the crime novels The Little Sleep and No Sleep Till Wonderland, a contemporary riff on the detective thriller following the investigations narcoleptic PI Mark Genevich; darkly funny explorations of the genre that carry the emotional charge of the author’s later works. Never previously published in the UK, Titan Books is delighted to bring them to the market for the first time in a brand new omnibus edition.

In The Little Sleep, Genevich is hired by a reality TV star, also the DA’s daughter, for a simple job – to identify a girl in a photo. Except she is the girl in the photo, and he doesn’t really remember meeting her. Wrangling deception, intrigue, cataleptic hallucinations and a body that could fall asleep at any moment, Genevich follows the trail into his own family history, and his departed father’s legacy.

No Sleep Till Wonderland sees Genevich dropping out, forced into group therapy by his landlord mother or face eviction. He’s working a case, finding a local suit’s lover, and getting to know his new friend, Gus. But soon Genevich is pulled into events over his head – rescuing a child from a burning house, maybe?; drug deals with a local bouncer and dealer; possibly getting a girlfriend. But solving mysteries is what Genevich does, starting with the mystery of what happened to him whilst he was asleep…

About the Author
Paul Tremblay has won the Bram Stoker and British Fantasy awards and is the author of Disappearance at Devil's Rock, A Head Full of Ghosts, The Cabin at the End of the World, Growing Things, Survivor Song and The Little Sleep and No Sleep Till Wonderland omnibus. He is currently a member of the board of directors for the Shirley Jackson Awards, and his essays and short fiction have appeared in Entertainment Weekly.com, and numerous year's-best anthologies. He lives outside Boston with his family. You can find him on twitter @PaulGTremblay.

Image - Titan Books
Titan Books will publish the omnibus edition of  The Little Sleep and No Sleep Till Wonderland on April 6th
Email ThisBlogThis!Share to TwitterShare to Facebook