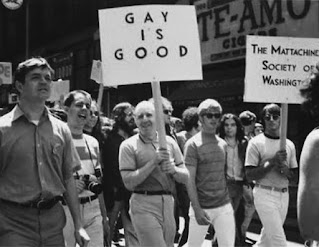 Cured is a fantastic documentary that made me angry, hopeful, and then a little angry again. It tells the story of the long campaign to get the American Psychological Association (A.P.A.) to remove Homosexuality from Diagnostic and Statistical Manual of Mental Disorders. Or, as one of the activists interviewed in the film said, ‘to stop psychiatry making us sick.’

It is also the story of the campaign for gay rights from the mid-50s to the 1970s. If the first part of the film, which shows the hostility towards homosexuality, does not make you angry then it should. There are vox pops from a homophobic public, there are the ‘treatments’ used to ‘cure’ homosexuality – Electro-Shock Therapy, Lobotomies and Aversion Therapy (which includes Electro-Shocking the genitals). This was never therapy, it was torture. Indeed, one of things that this film confirmed for me is the futility and cruelty of any kind of ‘conversion therapy’ in ‘treating’ homosexuality. The fact that in Britain in 2021 conversion therapy is still legal is a disgrace and if one person should watch this documentary it is Liz Truss.

At this point being homosexual would lose you your job and you could end up in a mental institution. Indeed, the (now) Reverend Magara Kennedy was told by her mother that she had to either get married or go to a mental hospital. So, she got married. At fourteen. This was her own mother.

However, gradually organisations were formed from the mid-fifties onwards that began to push for gay rights. We hear from Kay Lahnsen, who formed the Daughters of Bilitis (in 1955) and from Dr. Frank Kamney, who formed the Mattachine Society. These early gay rights activists, and we hear from a lot of them in this film, which is one of the reasons I liked it so much, had an unbelievable level of courage, although as Ron Gold says, he was afraid, but he felt it was something that needed to be done.

Then as the civil rights movements steps up a gear so does the gay rights movement, particularly after the Stonewall Riots. However, throughout this the A.P.A.’s choice to keep homosexuality on the list of Mental Disorders, holds everything back.

The film then really focuses on the battle with the A.P.A, which was a conservative organisation (as was a lot of American society in the 1950s and 60s). But it was a scientific organisation and that was how it could be attacked. Gay people pointed out that most of the research done on gay people focused on gay patients or gay prisoners and not the public. How many happy gay people were psychiatrists ever going to meet? And, if homosexuality was called a mental disorder, were not gay people encouraged to see themselves as ‘sick’ from the beginning? 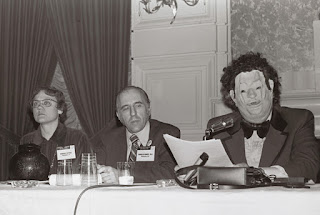 So, as well as protests and riots there was dialogue and administrative efforts with and in the A.P.A. to change their minds. Indeed, an unintended benefit of this film is that it is a good guide to activism. Gay rights activists invaded A.P.A. conferences but then tried to get a dialogue going. The worked with psychiatrists – some gay, some straight – to change things. They worked on getting people elected to key committees, whilst protesting on the streets. What this film seems to say is that if you want to change things you have to work different avenues.

There was some push against them, and the film focuses on Dr. Charles Socarides here, but gradually they changed things. In 1973 the A.P.A said they would take homosexuality out of the Diagnostic and Statistical Manual, and in 1974 it was confirmed by a vote of the whole A.P.A.

That is what makes you hopeful. What makes you angry again is realising that ‘conversion therapy’ is still a thing and that trans people are going through this whole battle all over again. Indeed, watching the early part of the film you can easily replace homosexual with trans when reviewing old newspaper headlines or listening to old TV footage and the battles do not end. Given the chance, the forces of conservatism will try to undo every right that has been won for us and sometimes it looks like the public just do not care enough. What this film shows is that people can be made to care and minds can be changed. Not necessarily all of them, but enough of them.

A fantastic film worth watching and one that I think just confirms that the British government* needs to pull its finger out and ban conversion therapy.

* The one thing I did wonder was whether the legalisation of homosexuality in Britain in 1968 had any effect on the debate in the US? It does not get mentioned at all in the film, but its timing does make me think surely it had some part in the debate/discussion, but perhaps not.
Follow Tony on Twitter @Lokster71
Cured is available to watch online until 28th March. Find out more and book tickets here.
Images - BFI Flare