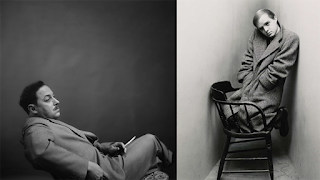 This is a fascinating documentary, directed by Lisa Immordino Vreeland, that tells the story of Truman Capote and Tennessee Williams. It purports to be a conversation but really it is a story told ‘in their own words.’ Those words sometimes revolve around their long – and difficult – friendship, but a lot of time they are about their lives and art in general.

They cover their family lives and upbringing; what it means to be a writer (or an artist in general); fame, criticism, love, friendship, sex, gayness, failure, and success. The two writers seem to have lived similar lives differently: both men were gay, both bought up in difficult families; both addicts; both early successes and both struggled with that addiction and depression.

The best thing about this documentary is that it is all told ‘in their own words,’ sometimes in their own voices and sometimes voiced by actors; in Capote’s case by Jim Parsons and in Williams’ case by Zachary Quinto. Both have memorable voices, which neither actor tries to directly impersonate but hints at. Capote’s is not far of being Deputy Dawg’s voice. Indeed, looking at the dates it would not surprise me if Deputy Dawg was a kind of impression of Capote, but I could be wrong. Williams’ voice is a slower, southern drawl.

Neither man seems to have had an easy childhood and both men seemed to put a lot of themselves and their experiences into their work. The story of what was done to Williams’ sister, Rose, seems utterly horrific by modern standards and is the core part of what became his play ‘Suddenly Last Summer’. It was adapted into a film in 1959 starring Elizabeth Taylor. Indeed, one of the things this film covers is Williams’ belief that, because more people will see the film versions of his plays (which often get the ends changed to satisfy Hollywood,) he suggests people leave ten minutes before the end. Capote too complains about what was done with Breakfast at Tiffany’s, in which he wanted Marilyn Munroe. He thought it was not an Audrey Hepburn part.

And that is how the film works. It is not a conversation in the proper sense of the word, but two men talking about the same topics and who, because they are interesting men who know how to use words, talk interestingly about those topics. There is footage of interviews with both men on various types of television programmes.

It is the sort of film you should watch if you have an interest in writers and writing. Sometimes you wonder whether you need to know about a writer’s private life to understand their work. Perhaps you do not. But, with some writers, their life is their work and both Capote and Williams fall into this group. If you are studying either writer, I suspect this will be an essential resource. Indeed, it even comes with an in-depth ‘bibliography’ in the credits, which is the first time I can remember seeing that in a documentary.

This perhaps makes it sound dry and academic, which it absolutely is not. Capote and Williams are far too interesting and far too thoughtful for a film like this to be dull. Their stories are interesting, their comments perceptive and if you like literature – whether that be books or plays – then I would almost say this is an essential watch.