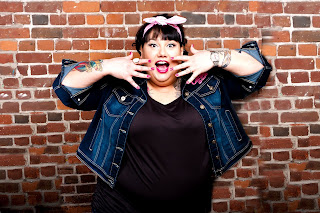 “If everyone decided to love themselves, imagine how many companies would go out of business overnight.”

When I look through my “recommended videos” list on Youtube, besides all the film trailers, gaming clips and interesting factual nonsense that I gravitate towards normally, I’m seeing a lot of “how to” videos for losing weight, getting fitter, dressing better, looking prettier. Now, I don’t know whether it’s because I have been looking at these things a lot more recently (I have), or if it’s the fact that the information has just become more online, because of people being bored in the pandemic or whatever, but negative Body Image is big business and it’s something that we’re spoon-fed, or at least made conscious of, right from the start or, at least it, I felt like it was.

I’ve always had self-image issues – how I looked and dressed at school age (not to mention being the weird/quiet/brainy nerd) meant that I got bullied, a lot. It kind of started in my first year of secondary school and, “for a laugh” someone had hidden my clothes in the gym changing room so I had to go home on the school bus dressed in my PE kit. I was humiliated, physically and emotionally, and that (and all the following instances of bullying) stuck with me for the past 40 years, shattering any self-confidence I had built up previously. Since then, I’ve always felt the need to blend into the background, to not stand out, to not be noticed, because my psyche can’t handle it. I’ve been on a diet for pretty much all of that time too, gaining rather than losing weight no matter what I try. So to see beautiful “plus-size” individuals being shown positively on screen and being, to quote Canadian actress Candy Palmater, “large and in charge” was refreshing.

The media, and therefore the public in general, is not kind to those who are different and that includes anyone who doesn’t conform to the “slim is beautiful” Western societal expectation and fat-shaming is becoming much more of a thing. This is brought home early on in the documentary with social media comments flashing up on screen saying things like “GROSS,” “She should cover up her arms,” “Fat DOES mean unfit,” even “Have fun dying.” We then go on to hear from six different people, two of whom are doctors by profession, all of whom are ethnically diverse, about their own experiences in “coming out as fat.” That was the phrase actually used in one of the interviews and it struck a chord with this being BFI Flare; fat people should be accepted for who they are, just as much as people of a different race, gender or sexuality. Hearing their stories of growing up and feeling constrained by society, or being loved by family but laughed at and talked about by the world at large, about feeling isolated, not being allowed to dress or look how they wanted to, “just wanting to know I wasn’t weird” – it all applies in so many other areas of discrimination. The stories they tell of some of the hate they got, how sidelined by society they felt, are heartbreaking because being fat is literally discriminated against. There are places you can’t go, clothes you can’t get, jobs you can’t do purely because you are “too big.” There was talk of anxiety, depression, self-harm, assault, rape and suicidal thoughts.

There was also a lot of talk about health and how the medical profession, in the main, have a bias, whether conscious or unconscious, against people who are overweight. Whether it’s misdiagnosing illnesses (lose the weight and you’ll get better) or a lack of preventative care (I don’t have the equipment to deal with fat people) fat people are made to feel like you are a waste of time - the story Candy tells about going for a smear test is horrifying. They also cover the issue of “well meaning” people who are “just concerned for your health” and how they just add to the negative voices in your head with very little medical evidence to back up their theories that fat is always unhealthy. In fact, one of the doctors in the film produced a persuasive argument (of which I am always wary) that there was no correlation in dietary studies about the actual amount of weight someone lost on a diet and how much it affected their health, like there is with smoking, drinking etc. She also said that the tendency to be a certain weight is just as heritable as the tendency to be a certain height and tall people are far less “blamed” for their stature. 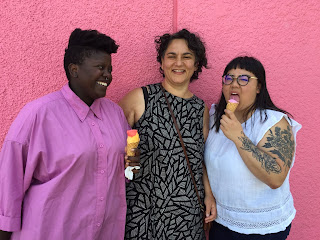 However, the “bad stuff” is not dwelt on overly long in the interviews. According to the director Shana Myara, this is meant to be a documentary about body positivity and these strong role models really do epitomise how it is possible to rise up, to get past the feelings of being wrong, being inadequate, being the second-class citizen that society deems to you to be just because of your weight. I think, listening to them, that the fact they were mentally and emotionally robust enough to come out about their sexuality has helped them to prepare for also “coming out as fat.” As comedian Joanne Tsung says in the film, “it mattered less to my family who I was sleeping with than it did that I did not want to lose weight.” The person I liked most in the documentary though was Lydia Okello, although I’m not altogether sure why. I think it was because they went from being so isolated, being the only Ugandan Canadian kid in their school, feeling like they didn’t fit in and not being “allowed” to go places and do things, to forging their own confident path as a fashion blogger and Instagram influencer without being as riotous and belligerent as some of the others. They gave themself permission to wear the colourful clothes, to be the cool person, to “take up the space” that they should do rather than fading meekly into the background or being right in your face, overcompensating.

I am not them though and, although it was a factually interesting watch, the body positivity message in Well Rounded, for me, fell a bit flat by reinforcing my current mental and emotional position rather than making me change my mind but that’s my fault rather than an issue with the documentary. The voices are still in my head, wishing I was as slim as I was the first time I thought I was fat and telling me I’m not ready yet to accept that it’s a thing I cannot change. I am not happy enough for long enough in my own skin, with how I look, how I dress or how I appear outwardly to the big wide world to inwardly be the confident, self-assured person that all of these people are. It did prove to me, by their examples, that it is possible to fight against all of the media and societal stereotypes, but it also showed me that I am not a strong enough person to be able to join that fight. And that’s a shame because it looks like a fun place to be.

Also, what was the deal with the animated chickens?

Well Rounded is available to watch online until 28th March. Find out more and book tickets here.
You can also find a fascinating "In Conversation" round-table talk about the film with the director, two of the interviewees, a psychotherapist and the programming curator HERE on YouTube for free.
Images - BFI Flare
Email ThisBlogThis!Share to TwitterShare to Facebook