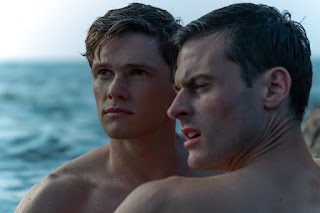 Firebird is a touching love story set in the Soviet Air Force during the Cold War. Sergey, a troubled young private, is counting the days till his military service ends. His life is turned upside down when a daring fighter pilot, Roman arrives at the base. Driven by curiosity, Sergey and Roman navigate the precarious line between love and friendship as a dangerous love triangle forms between them and Luisa, the secretary to the base Commander. Sergey is forced to face his past as Roman’s career is endangered and Luisa struggles to keep her family together. As the walls close in, they risk their freedom and their lives in the face of an escalating KGB investigation and the fear of the all-seeing Soviet regime. Based on a true story.

If you take Call Me By Your Name and transplant it from Eighties Italy to Soviet-occupied Estonia in 1977, then you have a rough idea of the vibe of Firebird. Whilst in the former we have Timothee Chalamet and Armie Hammer, here we have Tom Prior and Oleg Zagorodnii as our tragic heroes.

Prior, who also co-wrote the film with director Peeter Rebane, is Sergey, whilst Zagorodnii is Roman, the fighter pilot who arrives at the base that Sergey is stationed at. Assigned to work together by the base commander, Kuznetsov played by Nicholas Woodeson, they soon discover a mutual interest in photography and the theatre, and a secret love affair grows. The film jumps through the next decade, following their relationship - their first separation provoked by the suspicious KGB officer, Major Zverev (Margus Prangel), their eventual reunion and ultimately their final separation.

The film is visually satisfying - mastering the bleakness of the architecture in conjunction with a soundtrack largely dependent on classical music to evoke emotional turmoil. In one scene, though, the soundtrack uses "Rasputin" by Boney M to suggest that the characters have found some semblance of happiness only for this to be near immediately torn away by the arrival of Roman’s wife, and Sergey’s old friend, Luisa.

Tom Prior as Sergey is the emotional core of the film, picking out beauty through the lens of his camera, and it is his emotional journey that we follow. His desire to find love - with Roman - causes him to grow, to embrace his dream of being an actor but which also emphasises his failure to embrace alternative lovers, such as his fellow drama student. It is this that makes him a tragic hero - near blinded by the fact that Roman will never be the lover he so desperately wants.

Even with the threat of the KGB exposing his homosexuality (a plot line which seems to build, but ultimately leads nowhere), Roman fails to become a sympathetic figure. He takes advantage of the good-natured base commander’s secretary Luisa, marries her in order to throw Major Zverev off the scent and, when this appears to have been achieved, he discards her to lead a secret life with Sergey. An issue that I had with the character of Roman was that I felt that movie doesn't adequately consider the power dynamics between Roman and Sergey and the ethics of the handsome officer seducing someone of a lower rank.

Ultimately, the film is worth watching and, since it is based upon a true story, it does raise an interesting point for discussion - at what point should happiness be placed above duty. It gives us a window onto homosexuality in not only the seventies, but also in Soviet Russia/Estonia, and the fears that LGBT+ men had to deal with on an everyday basis simply for being who they were and loving who they wished.
In that respect, Roman’s actions in going ahead with a marriage that he may never have been truly invested in are, at least, understandable.
Image - BFI Flare
Email ThisBlogThis!Share to TwitterShare to Facebook