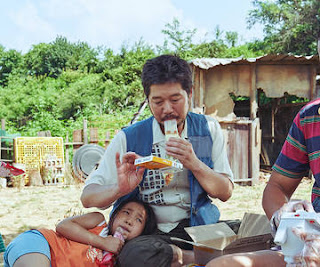 
Voice of Silence is the feature debut by director Hong Eui-jeong and has already garnered acclaim from critics and audiences in her native South Korea. The film is a thriller which shines a light on an aspect of criminality that isn’t often explored - it isn’t cool, it isn’t action packed, it’s the menial and messy task of cleaning up the blood and bodies for a criminal organization after they have done with their torturing and killing.

Her story concerns those members of society that are overlooked and have no voice, so her main character Tae-in (Yoo Ah-in), is literally mute. Unable to speak, the taciturn Tae-in relies on his older colleague Chang-bok (Yoo Jae-myung) to guide him through his dealings with the world. During the day they sell eggs in the local market, but they also work diligently at a second job – being the clean-up men for a criminal organization, tasked with getting rid of dead bodies and blood-soaked detritus.

They are deferential, obedient, and conscientious, so the headstrong young mafia boss decides to entrust them with an extra chore. He has started kidnapping as a side-line to his usual work and, promising them a hefty bonus in payment, he gives Chang-bok and Tae-in the mission of picking up a kidnap victim and holding them for 24-hours while a ransom is negotiated.

However, they are shocked to find a development they hadn’t bargained for - the kidnap victim is an eleven-year-old-girl, Choo-hee (Moon Seung-ah). To make matters worse, her father seems to be haggling over the ransom. The young girl sadly but knowingly informs them that this is because, according to her father, ‘her younger brother is enough’, and she is now ‘superfluous’ to family needs.

The older Chang-bok is a bachelor and lives in a house with others so he can’t take the child without causing suspicion, so she must stay with the younger Tae-in. He’s less than happy about the arrangement but resentfully straps the girl onto his bicycle and cycles out into the countryside.

He lives an all but feral existence in the middle of nowhere with his own little sister Moon-Ju (Ka-eun Lee), who has no contact with the outside world and lives in squalor and chaos in the ramshackle hut with her older brother, with no knowledge of the niceties of behaviour. 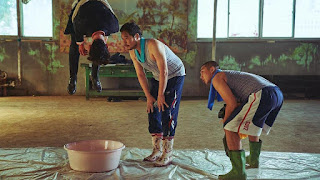 However, things take a turn for the worse when Chang-bok and Tae-in find that the next gang murder they have to clean up turns out to be the young mafia boss that arranged the kidnapping. The two men are then left holding a kidnapped child with no idea how to proceed.

The film then melds thriller with family drama as the nicely-brought-up Choo-hee has to endure an extended stay with Tae-in and the wild, but good-natured child Moon-Ju, in their shack far out in the rural countryside. She becomes a mentor and ‘older sister’ to Moon-Ju, teaching her how better to look after herself and she starts to put Tae-in’s shambolic life in order, even accompanying him to his gruesome ‘clean-up’ jobs.

Eventually an element of Stockholm syndrome comes into play as the young Cho-hee begins to feel appreciated in this unconventional home environment in a way she clearly has never felt in her own. The unusual relationship between Cho-hee and the silent Tae-in becomes the emotional core of the story and serves to demonstrate the civilizing influence of the feminine principle.

In Voice of Silence, writer/director Hong Eui-Jeong offers Tae-in as a representative of a near invisible underclass of people, without a voice in society - unrecognized, uneducated, and left to fend for themselves as best they can.

Not only are Tae-in and the older Chang-bok on the lowest rung of the social ladder, they are also on the bottom of the hierarchy of the criminal underworld. They live on the fringes, barely acknowledged. To try and stay unnoticed and always be thankful for what they have is the motto of the oddly religious Chang-bok, who constantly exhorts his younger charge to listen to the ‘prayer tapes’ he has given him as it may just create a miracle and endow him with speech. He blames his bad luck on missing church services.

They live in a social system which follows a rigid hierarchy, and which defines human beings, even children, by how much their value is in terms of money and profit, as in the case of Cho-hee, who is considered of less worth than her little brother simply because of her gender.

Hong Eui-Jeong’s cinematographer Park Jung-hoon presents the beautiful verdant landscapes, colourful sunsets and endless night skies of rural Korea, in contrast to the sordid dealings in the grubby, rubbish-filled towns. The film melds several genres, that of thriller, drama and even black comedy, a hard trick to pull off when one is dealing with the worst traits of human nature.

Leading us through the grim and callous transactions of the world they operate in, one which deals in torture, death, kidnapping and even the trafficking of children for organs, are the naïve innocents which are Tae-in and Chang-bok. Totally at sea once operating outside their routine, and clueless unless being given orders, they are as much hapless children as their eleven-year-old kidnap victim. Following these two guileless characters is what makes the journey through this deeply corrupt and merciless underworld bearable, but still gives us an unsettling perspective.

In Voice of Silence, Hong Eui-Jeong’s strange little film, the areas between right and wrong, beauty and disgust, tenderness and indifference, all become blurred. She has created an ambitious piece of work, ostensibly a simple story with odd, yet sympathetic characters, but one that offers a deeply disturbing social subtext.