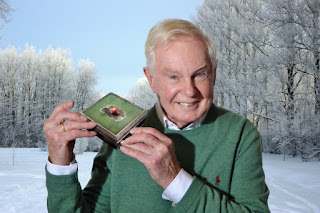 Christmas comes early as Big Finish Classics: The Box of Delights is opened by Big Finish Productions in time for the summer holidays...

Now due for a June 2021 release, this brand-new full-cast audio adaptation is based on the beloved novel by John Masefield, and follows the classic fantasy adventure about a schoolboy who is entrusted with a magical box. He soon realizes he has the ability to time travel and shapeshift, as he is thrown into a race against time to protect the box from an evil magician and to save Christmas.

Alongside the previously announced Sir Derek Jacobi as Cole Hawlings and Mack Keith-Roach as Kay Harker, more of the star-studded cast of this ten-part epic production has been revealed.

Mark Gatiss said: “There’s something special about The Box of Delights. From the opening Victor Hely-Hutchinson music, it is so beautiful it makes your hair stand on end. The whole idea and the tale has got such a sort of magic to it.

“And Abner’s a great part. The idea of a corrupt magician posing as a clergyman... it's weird and mystical and then also villainous. What can I say? It’s why you do it!”

Producer Emma Haigh added: “I’m thrilled we can finally reveal the wonderful cast for The Box of Delights. To have such stellar talent join the adventure was such a privilege and it was a joy to hear them all at work – their voices swept me away every day of recording. And I can’t wait for the production to be released so everyone can join this magical adventure too.”


Big Finish Classics: The Box of Delights is available to pre-order as a limited edition 6-CD box set (priced at £34.99) or digital download (at £29.99), at www.bigfinish.com.

Please note the box set edition is limited to 1,000 copies only.

Big Finish is currently operating a digital-first release schedule. The mail-out of collector’s edition CDs may be delayed due to factors beyond our control, but all purchases of this release unlock a digital copy that can be immediately downloaded or played on the Big Finish app from the release date.
Image - Sir Derek Jacobi - composition (c) Clayton Hickman
Email ThisBlogThis!Share to TwitterShare to Facebook