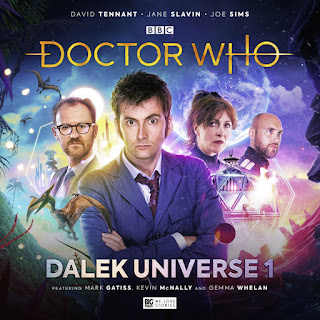 David Tennant is back as the Tenth Doctor in the first volume of the epic saga Dalek Universe, out now from Big Finish. Watch the trailer...

This first volume of full-cast audio adventures features a trio of thrilling tales, as the Tenth Doctor finds himself up against a malevolent businessman without his trusty TARDIS – but with the help of Mark Seven (Joe Sims) and Anya Kingdom (Jane Slavin), the day may just be saved once again.

Time has gone awry. The Doctor is lost, without his TARDIS. But he’s not alone. The Space Security Service agents Anya Kingdom and Mark Seven haven’t always been on his side in the past, but now they are here to help him.

And he’s going to need them - because the oldest foes of all are waiting to strike. Ready to take down their greatest enemy...

Writer John Dorney said: “Buying Time and The Wrong Woman form a two-part story, a Russell T Davies-style Tenth Doctor adventure with a cliffhanger in the middle. I can’t really say too much about The Wrong Woman but one of the things I was keen to do was to make it feel like you’re starting with a finale. The size and scale then just gets bigger and bigger as you figure out what’s going on. There are lots of twists and surprises going on.

“I also wanted it to be fast and funny. I remember reading something where either Russell T Davies or Steven Moffat talked about how they would do a finale: they would create big moments and set pieces, and work out how to connect them. I realised I’d got a few big moments I could hang the story off, and work a path between them, which gives a crazy journey on a large scale and hopefully a great sense of fun.”

Writer of The House of Kingdom Andrew Smith added: “I was really excited to have the chance to write for another Doctor, actually. The thing with the Tenth Doctor is that he says things before he’s fully formed a thought, and it tumbles out. Right from the TV special The Christmas Invasion he does that, and it’s all down to David Tennant’s delivery.

“The energy of this Doctor is something else, and it affects the pace of the story – boom, boom, boom! They don’t stand around for long, they get on with it. He’s a Doctor who doesn’t wait for things to happen, he gets things done and is in people’s faces. That energy is all over the play.”

Each of the three volumes in Dalek Universe will be released as a four-disc collector’s edition box set or download containing three brand-new full cast audio adventures, plus a selection of behind-the-scenes extras. Doctor Who fans worldwide can now pre-order all three volumes of Dalek Universe, which are available in three formats – collector’s edition CD, digital download or limited edition gatefold triple LP vinyl – exclusively from the Big Finish website (www.bigfinish.com), from just £19.99. Big Finish listeners can save by pre-ordering a bundle of the entire series for just £66 (as a collector’s edition box set) or £58 (as a download).
The Dalek Universe triple LP vinyls are strictly limited to a pressing of 1,000 per volume, and can be pre-ordered at £35.99 each, or £99 for the bundle of all three albums, again exclusively at the Big Finish website (www.bigfinish.com). Please note: the vinyl editions do not include any behind-the-scenes extras. However, listeners purchasing vinyl LP editions will receive a download of the story automatically and be given access to the CD edits as a bonus download. Episodes will be edited specifically for the vinyl format, presented as two parts, one on each side, each with opening and closing music. In addition, all pre-orders of the vinyls will also receive the behind the extras as a bonus download.

Big Finish is currently operating a digital-first release schedule. The mail-out of collector’s edition CDs may be delayed due to factors beyond our control, but all purchases of this release unlock a digital copy that can be immediately downloaded or played on the Big Finish app from the release date.