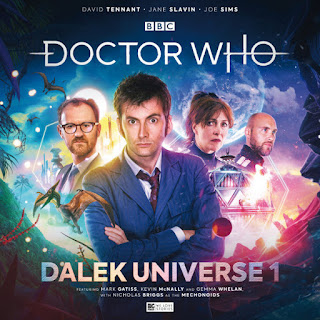 The Tenth Doctor returned to Big Finish in the epic saga of Dalek Universe. Oliver Kent listened to the first boxset which is out now...

David Tennant heads to Big Finish for a new season of adventures that appear to be sandwiched somewhere between "Planet of the Dead" and "Waters of Mars". Nine episodes over three box sets, starting with this one, Dalek Universe 1, being released a few weeks ago and running up to Dalek Universe 3 which is out this October. Whilst some box sets might have an episode that is a little weaker than the rest, this has no such weak links.
The set consists of a two part "season premiere" and a one part episode that leaves a tasty cliffhanger to whet our appetites for Dalek Universe 2, which is released this July. The writing team have clearly studied what does and doesn't work when it comes to NuWho and, whilst Anya and Mark don't feel like traditional NuWho companions, they do feel like companions from Ye Olde Who given a NuWho twist. You can tell that the writing team have clearly sat down and planned out the entire nine episode arc, and this makes it feel even more like a missing season of NuWho, so much so that I am expecting a certain two characters (you'll know which two I mean) from the two part premiere to return for the expected two part finale in Dalek Universe 3.

I intended to listen to one episode each night, but when I reached the end of the first episode and THAT cliffhanger, I had to continue onto the second episode to see what happened next time. And I was well rewarded with some excellent extra twists and some scene stealing moments from Gemma Whelan as The Newcomer practically channelling Charley Pollard for her entire time "on screen" - and that's not a bad thing.

The big name celebrity cameo in the first box set is Mark Gatiss, playing George Sheldrake, a slimy businessman trying to commercialize time travel. This casting too feels perfectly at home in a NuWho "missing season", given his numerous guest roles and writing credits on TV and he is fantastic - dastardly and scenery chewing as only Mark Gatiss can do.

Where, then, does that leave Davis Tennant? Why, it's as if he never left, slipping on the accent with the trenchcoat and that cheeky smile. His rapport with his new companions, specifically Anya, is fantastic - and his interplay with Gemma Whelan is absolutely marvellous.

Should you buy this box set? Yes, yes, one hundred percent yes. It's quite probably the most fun I've had with a Big Finish audiodrama in a while - you need to grab it before you get THOSE twists spoiled and before the next box set debuts.
Dalek Universe 1 is available exclusively from the Big Finish Website until 31st July when it goes on general sale.
Image - Big Finish
Email ThisBlogThis!Share to TwitterShare to Facebook