Book - The War of the Poor 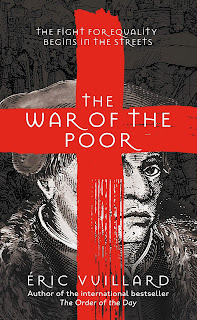 Tony Cross is reading all the books on the International Booker Prize shortlist ahead of this year's awards in June. Here are his thoughts on Eric Vuillard's The War of the Poor, translated by Mark Polizzotti...

I am not sure how Éric Vuillard does it. He manages to pack so much into 100 pages that other writers should take note. This is fiction, but it is also history. Of a kind. This is prose, but it is also poetry. Sometimes.

It is the story of Thomas Müntzer, the 16th-century German preacher, whose radical ideas Marx, Engels and Kautsky saw as a precursor to communism. Müntzer's preaching intertwined with uprisings against various German Princes by the workers - to use a broad term - in several German states. I do not know much about them.

It isn't a period of history I'm particularly familiar with but there is more radicalism going on in the Medieval world than we often think, even if it is built on religious foundations, not political ones. Vuillard mentions some of them: how the printing press made books more accessible; John Wycliffe's translation of the Bible into English - which was seen as an attack on the Church; the Lollards; the Peasants Revolt in England; John Ball and Jack Cade; Jan Hus in Bohemia and Martin Luther. Luther was to side with the Princes against Müntzer. If you want a brief history of religious radicalism here it is.

Müntzer's radicalism is built on the Bible. He flings quotations from it at his enemies. Vuillard's book is full of quotes and references: "He cited the Gospels: 'You cannot serve both God and money.'"

Vuillard sows a seed that makes you want to read more about this kind of religious radicalism. Partly because it is fascinating and partly because - in my case - I am tired of seeing Christianity used by the right and the alt-right as if their evangelicalism is the only acceptable form of Christianity. Which, it seems to me, it is not. Evangelicalism - or certainly the loudest of the evangelicals - have gutted Christianity of its message. And this book is a good reminder of that:

"He verified and sowed his illicit beliefs long the way: 'If God would have had any bondsman from the beginning, he would have appointed who should be bond, and who free.'"... [This is John Ball, quoted by Vuillard.] The most famous quote attributed to John Ball, which does not get a mention here, is "When Adam delved and Eve span, who then was the gentleman."

I enjoyed this book a lot. You should all read it. It is short and strong. It is beautifully written. I wish I could read it in the French original, but I cannot. Applause to the translator Mark Polizzotti.

You should read the 'Order of the Day' too. They make a fine double-bill. Neither of them is long, but both pack a punch.
Follow Tony on Twitter at @Lokster71
Image - Amazon
The 2021 International Booker Prize celebrates the finest fiction from around the world, translated into English.