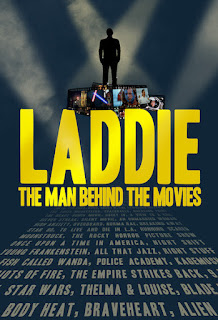 Tony Cross discovers "the man behind the movies" as he watched the documentary Laddie, out now from Central City Media...

Laddie, directed by Amanda Ladd-Jones, is a documentary about Alan Ladd, Jr aka Laddie. Now, if you are a film buff you will probably know who Alan Ladd, Jr. is. He is best known as a producer and studio head. Films that have been developed with his involvement include – and I am picking just a few here – Bladerunner, A Fish Called Wanda, Chariots of Fire, Star Wars, Braveheart*, The Right Stuff, Police Academy, and many, many more. The film uses his involvement in Star Wars to hook a viewer who might not know much about him, but then does a good job of not letting that unbalance the film.

Laddie was the son of Alan Ladd. Alan Ladd is probably best known for playing Shane, the strong silent cowboy who comes to town, does the right thing and leaves. He was also an absent father who drank himself to death. That is where we start, although we do not hear a lot about it from Laddie himself.

Indeed, one of the ironies of this film is that Laddie appears to be a man of few words. Even though this film is being made by his daughter he still does not say much. When she asks him – and I paraphrase – to start the story off he pauses and then says, “I was born.” And stops. It is funny.

But there are enough other talking heads to tell his story. There is Amanda Ladd-Jones herself and other members of the family. There are directors, including George Lucas, Ridley Scott, Mel Brooks, Richard Donner** and many others. 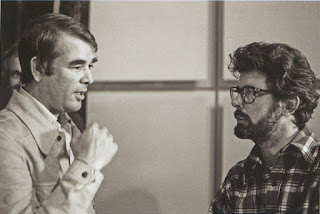 There is a tendency to romanticise the Hollywood of the 70s and 80s. The period before the ‘bean counters’ took over when films were agreed by men – I think almost always men – without needing to be run through committees. People like Laddie then left the artists to do their thing. This may be true, but Laddie seems to have been one of those people. Once he decided that someone could do a job, he let them do it. Sometimes it did not go well. The Right Stuff, for example, seems to have been something of a nightmare. Not every film they made was a success. Some have had success since: The Rocky Horror Picture Show and Bladerunner being the two most obvious examples. Some have disappeared quietly, perhaps waiting to be rediscovered. Perhaps not. The film does an interesting job of telling the story of the changing face of Hollywood though with Laddie coming across as a strong and unchanging pole star around which everything moves. There is almost an element of Norma Desmond here. It was not Laddie who got small, it was Hollywood. Although a person more different to Norma Desmond than Laddie is hard to come up with.

There is a part of you that wonders how much of a real picture of Laddie you can get from a documentary made by his own daughter and filled with his friends as talking heads. Maybe he is the solid, honest man in the film business that he is portrayed here, although Amanda Ladd-Jones does talk quiet openly about how absent he was when she was growing up. But we do not really hear any dissenting voices. It may be that there are not any. I hope so.

In the end this is an interesting documentary about a man whose track record in film deserves a documentary. If you are interested in film there are enough good stories in here to make it worth your while and it does make you yearn a little for a lost – perhaps mythical – Hollywood.

I did find myself thinking, and this may be the ramblings of an addled mind, that Alan Ladd, Jr., whose father was absent, perhaps chose to model himself not on his real father but on Shane. The quiet, honest, and upstanding gunfighter. That he chose an aspect of his father, an ideal if you like, to build his personality around. Whether this is conscious or not it does seem like a mild possibility.


* A film I find incredibly annoying because of its historical inaccuracy. I know we are supposed to forgive these things in the name of a good story but this one is some egregious that I cannot let it go. Sorry.

** Richard Donner is very funny. As is the little chat that runs through the credits.
Laddie: The Man Behind The Movies is now available to rent and buy on Sky Store, iTunes/ Apple, YouTube, Google Play and Rakuten
Images - Central City Media
Email ThisBlogThis!Share to TwitterShare to Facebook