Documentary - Secrets of the Whales 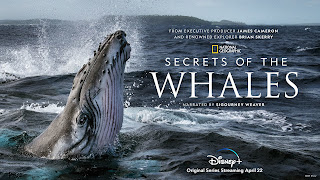 This Earth Day [which is today - Ed], take a deep dive with Secrets Of  The Whales​ from National Geographic channel, a Disney+ Original Series executive produced by James Cameron and narrated by Sigourney Weaver. Here's a sneak peek...

Secrets of the Whales, from National Geographic, plunges viewers deep within the epicentre of whale culture to experience the extraordinary communication skills and intricate social structures of five different whale species: orcas, humpbacks, belugas, narwhals and sperm whales. Filmed over three years in 24 locations, throughout this epic journey, we learn that whales are far more complex and more like us than ever imagined.