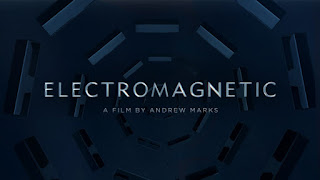 If you’re “of a certain age”, you have fond memories of watching Roald Dahl’s Tales of the Unexpected on TV, with each episode being a darkly humorous little story with a twist to the ending. That’s very much what Electromagnetic, the debut short film from first-time director Andrew Marks, reminded me of, right down to the seventies feel of the production design.

As we've been lucky enough to be allowed to share the full short film with you below [it's under 10 minutes long so perfect for a coffee break - Ed] I won’t spoil the plot for you but there are some things I do want to mention. Essentially, the story revolves around Tomas, an obsessed film editor, getting his film director friend Stanley, who dropped in on his way to an after-premiere party with his wife Alexis, to listen to a mysterious gold coloured audio reel in his editing suite.

The story concept of a strangely hypnotic audio reel did pull me in, promising mystery and intrigue. However, having just read a supernatural-based novella which used a similar plot device, although with a different MO and pay-off, I maybe expected a little too much from this short film. As it was, after a build-up which showed a lot of potential, the real-world ending felt a little tacked-on to me and was a bit of a disappointment. 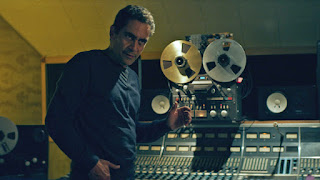 With a small ensemble, the casting was always going to be important. The wonderful José Zúñiga as Tomas is as enticingly creepy as you’d want an obsessive to be and he was compelling to watch while Bodhi Elfman as Stanley keeps his own theatrics just on the right side of exaggeration, making their on-screen chemistry work very well indeed. For me, the wives were less convincing and felt a bit extraneous to the plot. Tomas’ wife Zoe, played by Sarah-Jayne Bedford, had a look of suitably ethereal madness about her, but Alexa’s (Kate Simmons) Brooklyn drawl did remind me of someone else and, when I realised it was Rosemary the Telephone operator in Hong Kong Phooey, it was a bit off-putting. That aside though, I felt the four-hander could easily have become a two-hander with just Tomas and Stanley and that would have held my attention equally well.

As you would suppose, from someone who has worked in big budget FX, there are visual effects used in the film and they fitted well with the seventies feel – the audio of the reel was nicely disorientating, as it was meant to be, and the “face distortion”, although slightly Doctor Who-ish in style, was effectively used and not overdone. I really didn’t get the Stargate-esque circle of nine blocks though, it looked extremely cartoonish and dated (rather than era-relevant) and spoiled the polish of the final film for me. However, that may have been lack of funding rather than a design decision.

The press kit says that this is a proof of concept for a feature film and this excites me, as a bigger budget would definitely allow for more polished effects to enhance the psychological factor of the story. Also, while the current story is strong enough for a half hour episode of an anthology TV series, like the aforementioned Tales of the Unexpected, it would be really interesting to see how this could be further expanded upon to fill a two-hour slot. My hope is that the film-maker takes a deeper dive into the obsessive nature of Tomas, working it into other areas of his life, maybe giving him a backstory and becoming a more in-depth Joker-esque character study. If José Zúñiga reprised his role here in a feature film like that, it would be a captivating watch.
Thanks to Andrew Marks, 4WTMedia and Alter Channel for allowing us to share the full film with you.