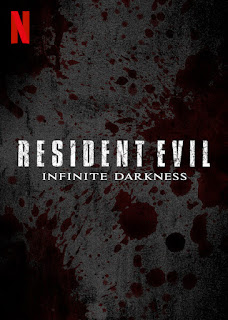 Known as the gold standard of survival horror games with over 100 million units shipped worldwide, Resident Evil is celebrating its 25th anniversary and Netflix have announced that the upcoming original CG anime series, RESIDENT EVIL: Infinite Darkness, will be launching in July this year.

Three years after 2017's CG film “Resident Evil: Vendetta,” technology has further evolved, creating the groundwork for a new series in unprecedented full 3DCG animation. RESIDENT EVIL: Infinite Darkness will be produced and supervised by Capcom's Hiroyuki Kobayashi, who is responsible for bringing numerous titles in the Resident Evil series into existence. TMS Entertainment, which has birthed various anime series, will produce the series, while Quebico, led by Kei Miyamoto, the producer of Resident Evil: Vendetta, will be in charge of the full 3DCG animation production.

This will be a horror-action series based around the stories of the two popular characters, Leon S. Kennedy and Claire Redfield. By adding suspense into dynamic action scenes, this series will reveal a Resident Evil world unlike anything seen before.
Eiichiro Hasumi, the critically-acclaimed director behind some of Japan’s biggest live-action hits including the Umizaru or Mozu, series, as well as The Sun Does Not Move will be directing the upcoming series with Yugo Kanno, a versatile musician active in a wide range of fields and genres, including documentaries and games, responsible for the musical score. To celebrate the upcoming launch and to give fans a glimpse behind the scenes, both Eiichiro Hasumi and Yugo Kanno talk exclusively about their involvement and exciting work on the upcoming anime. 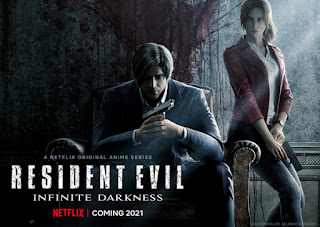 Here's the Q&A with Eiichiro Hasumi

Q. You have built an impressive career in live-action, including many popular action films and series. How did it feel directing a 3DCG series for Resident Evil, a globally popular IP, as your first foray into anime?

A: Being involved in a work with such a long history and so many fans gave me more joy than it did pressure. I was supported by the amazing staff during my first attempt at a full CG anime. I am so appreciative of their efforts and truly feel that they dragged me across the finish line. While this is a full CG anime, I strove to adjust the camerawork and lighting atmosphere to resemble the live-action filming I usually do to instill this work with a sense of realism. Since the characters are loved by many people, we ensured that our depiction of them does not betray the fans’ expectations. It was also reassuring that the motion capture actors and voice actors were the cast that play Leon and Claire.


Q. Leon and Claire are popular Resident Evil series characters that are beloved by fans across the globe. What did you want to draw from them in this work?

A: Leaning on a suggestion from the Executive Producer Kobayashi, we decided to portray Leon as a somewhat cynical character in contrast to Claire. These events take place in 2006, between the time he was a young man filled with a sense of justice and 2014, when he had become slightly fatigued by the endless fighting as depicted in “Resident Evil: Vendetta.” The suit Leon wears is important as it symbolizes this position. I was impressed because he looks cool even in formal attire.

Q. This work will be released in 190 countries on Netflix. What kind of viewers across the globe would you like to watch this? Please tell us if there was anything you were conscious of specifically because it is a global release.

A: I really appreciated that the ADR Director Alex worked hard on this project for a long time, from the motion capture stage for the English translation of lines, as well as the culture and customs. When I received this offer from Producer Shinohara, I was asked to add an element of suspense, so based on the mystery of what happened in the Penamstan War six years earlier, we constructed the story to shuffle the timeline and slowly turn over the cards to reveal the truth. I hope that both fans of the Resident Evil series and non-fans alike can enjoy this element too, while watching the series in one go. 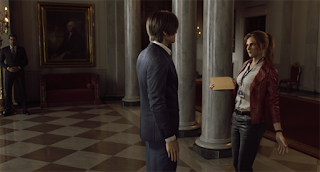 And here's the Q&A with Yugo Kanno

Q. You have composed music for works from various genres, but what were you conscious of when producing the music for this work? Were there any tricks you used to generate the unique atmosphere of Resident Evil?

A: Since this is an internationally popular series, I watched the previous Resident Evil titles and inherited the spirit of the many people who worked on them, and took on the challenge of creating a new atmosphere through trial-and-error. I was keenly aware that this work would be released on Netflix, so I focused on the scale of a Hollywood film so that overseas viewers could also enjoy this.


Q. This wasn’t like the live-action films or drama settings that you have collaborated on in the past with Director Hasumi. Please tell us if you had any new realizations or discoveries unique to an anime production set, or any points of particular focus.

A: It was not particularly different from live-action films or dramas. Since I received the same detailed instructions as usual from Director Hasumi, including the exact impression and way he wanted to show the visuals, I was not particularly conscious of the fact this was an animation during its production. In fact, it feels like I am only now realizing that this is an animated series. (laughs)

Q. What sort of themes or images did you share with director Hasumi when producing the music for this series? Please tell us if there were any discussions that left an impression during your communication with the director.

A: During my conversations with Director Hasumi for the demo music for the first trailer, I realized that even though this was a work of horror, it isn’t typical of Resident Evil to rely too much on music to scare. However, it has to be scary too, so I worked on striking that balance for the music through trial-and-error while sharing the demo music with him.
Images & info - Netflix
Email ThisBlogThis!Share to TwitterShare to Facebook