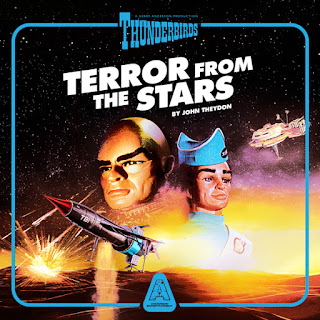 Stand by for action – the International Rescue team returns in a brand new full-cast enhanced Thunderbirds audiobook, Terror From the Stars, from Anderson Entertainment...

Now available as a download from the Big Finish website, Terror from the Stars features a host of incredible vocal talents playing the characters all Thunderbirds fans know and love (and love to hate!)

Thunderbird Five is attacked by an unknown enemy with uncanny powers. An unidentified object is tracked landing in the Gobi desert, but what’s the connection?

Scott Tracy races to the scene in the incredible Thunderbird One, but he cannot begin to imagine the terrible danger he is about to encounter. Alone in the barren wilderness, he is possessed by a malevolent intelligence and assigned a fiendish mission - one which, if successful, will have the most terrifying consequences for the entire world.

International Rescue are about to face their most astounding adventure yet!

And as part of the audiobook, fans can also hear a message from David Graham, who played the original Parker (along with Brains and Gordon), as he passes the baton to the new team of voice actors.

This audiobook, an adaptation of John Theydon's 1965 book Thunderbirds, is the first of Anderson Entertainment's new range of audio versions of classic Gerry Anderson stories from the 1960s and 1970s, thanks to a new licensing deal with ITV Studios.

Thunderbirds: Terror from the Stars is now available as a digital download, exclusively from www.bigfinish.com. It is also available as a four-CD box set that includes a behind-the-scenes documentary, alongside a hardcover reissue of the original book, exclusively from shop.gerryanderson.co.uk.
Image & info - Big Finish
Email ThisBlogThis!Share to TwitterShare to Facebook