Book - At Night All Blood is Black 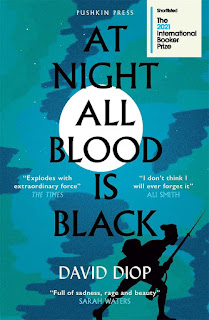 Tony Cross is reading all the books on the International Booker Prize shortlist ahead of this year's awards in June. Here are his thoughts on At Night All Blood is Black by David Diop, translated from French by Anna Moschovakis...

This is a great book about the Great War and the effect it has on human beings. It also gives a voice to the often-forgotten soldiers of the First World War. The men who came from the colonies of Britain and - in this case - France to fight and die for their 'homeland.'

The narrator, Alfa Ndiaye, is from Senegal. He and his friend Mademba Diop are in France fighting against the Germans. The story begins with the brutal death of Mademba Diop and the effect it has on Alfa Ndiaye. How it opens his mind to thoughts he would not have thought before and how he realises that his actions after Mademba Diop's death change how he is seen by his fellow soldiers - both white and black.

He is aware that:
"The captain's France needs for us to play the savage when it suits them. They need for us to be savage because the enemy is afraid of our machetes."

He knows that a kind of temporary madness is necessary for the battlefield if a soldier is to be able to do his job, but Alfa Ndiaye is also aware that what he is becoming is something darker. Is it madness? He certainly seems to frighten his fellow soldiers who, gradually, withdraw from him as the days pass. His fellow African soldiers start to talk about him as a dëmm - a taker of souls. But the French are afraid of him too.

"I have come to understand that it wasn't the blue-eyed enemy from the other side who killed Mademba. It's me."

Alfa Ndiaye is unravelling. The book jumps back and forth in time as he re-visits his childhood and youth. How he grew up and his relationship with Mademba Diop but all the time there is a tension in the writing. As if we are waiting for something terrible to happen. Or more terrible than what has already happened.

The book it reminded me of most was 'Ceremony' by Leslie Marmon Silko. This deals with a different war, World War Two, and a Native American's post-war breakdown. 'Ceremony' though is less bleak. It is, after all, as much a story of recovery as of breakdown.

David Diop has written a great book, although greatness is measured not just in the here and now but in the longevity of a story. I think this one will last, but what do I know?

Its subject matter makes it a hard book to read but if you are going to read modern books about World War One then I would make this as essential a read as Pat Barker's 'Regeneration'. I would also recommend reading David Olusoga's 'The World's War: Forgotten Soldiers of Empire' alongside it to give you a historical insight into the experience that David Diop is fictionalising.

The translation by Anna Moschovakis helps make this a memorable read. It feels like a surviving extract from some lost epic poem or a story that is told around campfires with its repetition of words, phrases, events, and thoughts. The language is simple, but not simplistic.

Towards the end, indeed, David Diop talks about stories as Alfa Ndiaye tells one - a story within a story - and at one point he says: "Princes, like wrestlers, always have scars. It's their scars that tell their stories." And it seems to me that Alfa Ndiaye’s story scar is mental and not physical. It is his friend's death that scars him.

Read it.
Follow Tony on Twitter at @Lokster71
At Night All Blood is Black is released in Paperback today
Image - Amazon
The 2021 International Booker Prize celebrates the finest fiction from around the world, translated into English.