Book - In Memory of Memory 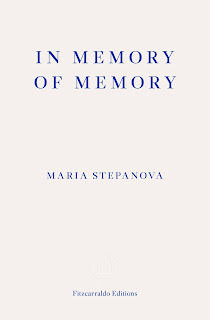 Tony Cross is reading all the books on the International Booker Prize shortlist ahead of this year's awards in June. Here are his thoughts on the final book on the list, In Memory of Memory by Maria Stepanova, translated from Russian by Sasha Dugdale...

I fear I may struggle to do this book justice. There is so much in it. I believe the literary term would be 'thickness'. But this is a book that pulls you in. Maria Stepanova is a Russian poet. This is the story of her family. Her memoir. Stepanova says she has been thinking about and working on this book for years.

There is part of you that thinks this will be a book filled with horrors. This is, after all, the story of a family of Russian Jews living through a time of totalitarianism and mass murder. Yet, Stepanova's family seems to have been touched by these things tangentially (or the family has edited its own history to forget some of the darker parts.) They survived. They survived pogroms, they survived revolution, they survived wars, and they survived Stalin. Mostly. And yet all these things are part of the book. If you have an interest in modern history this is a book worth reading. As she says:

"Everyone else’s ancestors had taken part in history, but mine seemed to have been mere lodgers in history’s house."

But the book is more than just a memoir:

Stepanova talks about how we interact with the past and how we treat the dead. If you are a historian, you should read this book. It will make you think about what the past is and how we pull it into the present:

“Unlike nature, past lives are endlessly submissive, allowing us to do whatever we may decide to do with them. They reject no interpretation, endure any amount of humiliation, exist outside the rule of law or any notion of fair play. Culture treats the past as a state treats its mineral wealth, mining it for all its worth; this parasitical relationship with the dead is a profitable industry.”

The book meanders and digresses, which I like. It feels a bit Proustian. Or Sebaldian. Stepanova draws in cultural figures, books, and music. There is part of me that thinks this is a book that no English person could ever write. Perhaps I am wrong? This is a book with a European perspective, which - much as I consider myself a European - is different to the British perspective. The history is different, so the experiences are different. Which is another reason to read it.

This was the final book in the International Booker Prize Shortlist for 2021. They have all been good reads. This though was my favourite. It is the longest of the six books. It is the one that takes the most time to read. Is it too long? No. I do not think so. The time invested is part of the pleasure. We rush too many things in 2021. Sometimes things need to be savoured.

I should once again compliment Sasha Dugdale, the translator. You feel that she has reflected the feel of Maria Stepanova’s writing as well as its meaning. This is, as I have said elsewhere about my reactions to translation, more of an instinct than a science. After all I do not speak Russian. It just feels right.

As I said, I fear I have not done this book justice. The only thing I can suggest is you read it and decide for yourself.

Follow Tony on Twitter at @Lokster71
Image - Amazon
The 2021 International Booker Prize celebrates the finest fiction from around the world, translated into English.