Book - When We Cease to Understand the World 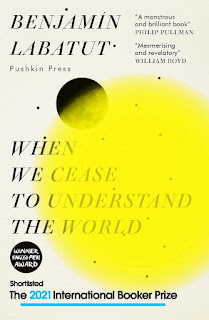 Tony Cross is reading all the books on the International Booker Prize shortlist ahead of this year's awards in June. Here are his thoughts on When We Cease to Understand the World by Benjamín Labatut, translated from Spanish by Adrian Nathan West...

This is, in many respects, a brilliant book. A non-fiction novel. It is packed full of information and ideas. Indeed, it reminded me most of Primo Levi's 'Periodic Table'. The way it weaves fiction around facts. Yet, I really disliked it.

I think it is because it is a polemic, which I think can be summed up by the final sentence: "But, really, who would want to do that?" Labatut is talking about a citrus tree and how one could find out how long it has left to live, but he is really talking about science. A particular form of science. The most abstract of mathematics and physics. He seems to feel that trying to understand the nature of reality has led mathematics/physics to a level of incomprehensibility that baffles everyone. Another quote from Labatut:

"We can pull atoms apart, peer back at the first light and predict the end of the universe with just a handful of equations, squiggly lines and arcane symbols that normal people cannot fathom, even though they hold sway over their lives. But it's not just regular folks; even scientists no longer comprehend the world."

Or, to put it another way, he seems to be hinting that maths/physics is, basically, doing a glorified version of what E B White warned of when he talks about analysing comedy: “Analysing humour is like dissecting a frog. Few people are interested, and the frog dies of it.” Labatut’s suggestion being that we are losing what our understanding of what being human means through high falutin’ scientific ideas.

Now, I should pause here and say that I am a bear of very little brain and it is possible that I have totally misunderstood what Labatut is trying to say. Maths and science are not my strong points and sometimes I share a portion of Labatut's doubts. Sometimes scientists talk about concepts so rarefied - and I am going to include almost all of quantum physics here - that we must take it for granted that we are being told 'the truth.' I cannot possibly know that. So, my reliance on physicists for a picture of the universe is - to me - as much a matter of faith as a 14th century peasant would rely on a Priest for their picture of the universe. But there are scientists out there trying to make these concepts comprehensible to people who cannot possibly get their head around the maths behind a lot of these concepts. Especially when expressed as complex equations.

Labatut seems to be suggesting that science is opening a dark door. The stories he tells - and how much is fiction and how much is fact I can only guess at (although he addresses some of this in his acknowledgements and gives you a reading list) - hint at people driven to the point of madness to visit intellectual places they should not be going. As if science will awaken some Lovecraftian entity. He hammers home that these experiments and ideas have deadly consequences - from poison gas used in both World War One and the Holocaust to the Atomic Bomb – that go beyond what might start as an academic thought experiment.

Some of the people he talks about - Schrödinger, Bohr, Heisenberg, and Einstein - are familiar names to me. Others, like Grothendieck, I had never heard of. The way he talks about them though is as if they were embarking on journeys that they should never embark on. As if science was a horror movie and we were watching people about to open a door that should never be opened.

Perhaps I have not understood the book. That I am prepared to admit.

Yet, I gave it four stars on Goodreads. Why? Because I think it is magnificently written. I think Adrian Nathan West has made what must be a dense text to translate sing. It also explains some tough scientific concepts that I have never been able to understand in ways that make me think I now can understand them.

I think it is a book worth reading and I am glad I read it. But I did not like it.

How is that for a paradox Mr. Physicist?
Follow Tony on Twitter at @Lokster71
Image - Amazon
The 2021 International Booker Prize celebrates the finest fiction from around the world, translated into English.