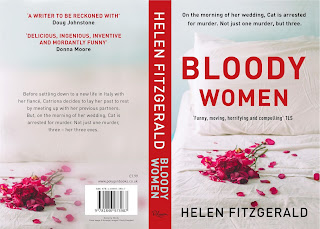 Synchronicity Films is continuing its collaboration with renowned author Helen FitzGerald (The Cry), optioning the rights to her novel Bloody Women (published by Birlinn 2009)...

Bloody Women is being adapted for the screen as an 8 episode darkly comedic thriller series by award-winning writer and journalist Lorna Martin, who co-created (with Sharon Horgan) and wrote the critically acclaimed comedy drama series Women on the Verge.

On the morning of her wedding, while at a posh hairdresser’s in Glasgow getting an up-do, 33-year-old Cat Marsden is frogmarched to a police station and shown a severed penis. She tries not to laugh but… it’s a severed penis. She can’t help herself. On very close inspection, she confirms that it almost certainly belongs to her ex, Johnny. She also confirms that she slept with him in the hours before his death, the days leading up to her wedding. What she can’t confirm is whether or not she’s responsible for mutilating and murdering him. So begins a bold, original, and playful series about complex women, love and… a serial killer.

Claire Mundell, Founder and Creative Director at Synchronicity Films, says: “We’d probably option every Helen FitzGerald novel if we could, but Bloody Women is definitely one of our favourites – a gloriously playful, hooky page-turner with its tongue firmly in its cheek and an idiosyncratic but instantly loveable female lead. In Lorna Martin, we’re so lucky to have found the perfect screenwriter to adapt this big-hearted and entertaining novel for television.”

Helen FitzGerald adds: “Bloody Women was such a fun book to write and I am so excited that my favourite producer, Claire Mundell of Synchronicity Films, is adapting it. After the brilliant adaptation of The Cry, I cannot wait to see what they can do with this one. And I am bowled over to have screenwriter Lorna Martin adapting, whose work is funny and dark and twisted and poignant - exactly my cup of tea. This is a match made in serial killer heaven!”

Lorna Martin adds: “It has been an absolute thrill escaping into the hideously dark and twisted world Helen created and adapting it with the fantastic team at Synchronicity. I loved The Cry and am a huge fan of the tragedy and comedy that runs through Helen’s work. As well as the darkly comedic murder mystery in Bloody Women, what really attracted me to the project were the flawed and dysfunctional but also very human female characters at the heart of it. Worryingly, I found them very relatable."

This marks the third project in the ongoing collaboration between Synchronicity Films and Helen FitzGerald, following the announcement of the author’s latest novel Ash Mountain also heading into development as a television series with the producer.

Helen FitzGerald is the bestselling author of Dead Lovely (2007) and ten other adult and young adult thrillers, including My Last Confession (2009), The Donor (2011), The Cry (2013), which was longlisted for the Theakstons Old Peculiar Crime Novel of the Year, and Viral (2016). Helen worked as a criminal justice social worker for over ten years. She grew up in Victoria, Australia and now lives in Glasgow.

Lorna Martin is a television show creator, scriptwriter and playwright. She co-created (with Sharon Horgan) and wrote the critically acclaimed comedy drama series “Women on the Verge” for UKTV and RTE, adapted from her hit comic memoir about her experience of psychotherapy, “Woman on the Verge of a Nervous Breakdown”. For stage, her play Party Politics, was performed as part of Oran Mor Theatre’s A Play, A Pie and A Pint 2018 season.

Lorna is also an award-winning journalist and was formerly Scotland Editor of The Observer. She travelled across the world in search of good stories and won an Amnesty International Media Award for human rights journalism for exposing the long-term detention of child asylum seekers. Before her career in journalism, Lorna worked for several years as a teacher.

Her interests as a writer span comedy and drama, and her journalistic instincts draw her to true stories.