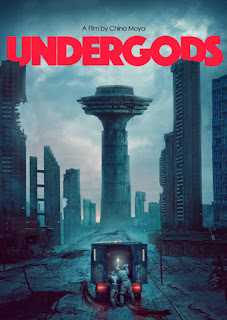 Spanish director Chino Moya's debut feature Underdogs leads us through a crumbling European dystopia in what appears to be an apocalyptic wasteland. It’s grim, dilapidated, grubby and unnerving. The narrative consists of three slightly interweaving stories which emanate an unremitting tone of dread.

Framing the loosely interlinking stories are scavengers K (Johann Myers) and Z (Géza Röhrig), who roam the dirty post-Apocalyptic landscape on the lookout for corpses... or someone they might turn into a corpse (fresh meat).

The environment, disturbing as it is, is also aesthetically extraordinary. Shot by cinematographer David Raedeker in unforgiving greys in what look like nuclear-fallout regions, the ambition here was clearly to film in the most brutal of Eastern European locales.

Within crumbling concrete blocks or rows of identical houses the stories reveal relentless domestic conflicts, while slightly grubby business fat-cats preside over dingy offices and slink through sordid underpasses and slums to their relatively well-stocked, if still dimly lit, apartments.

The viewer witnesses the ruin of three different men as their dull lives begin to unravel. Their existence seems uneventful, punctuated only by domestic indifference or disharmony. Then, in all cases, a stranger enters the picture, with explosive results.

The first incident is set in a spartan new housing block, still under construction, home to unhappy couple Ruth (Hayley Carmichael) and Ron (Michael Gould). One night there is an unexpected knock on their door. Apparently, Harry (Ned Dennehy), one of their neighbours on an upper floor, has locked himself out of his flat and is unable to reach the management. The pair feel compelled to offer him shelter for the night, but inevitably, Harry is not quite what he seems to be.

The second tale unfolds as a rather grim (Grimm) bedtime story is told by father Octavius (Khalid Abdalla) to his little daughter Horatia (Maddison Whelan). It concerns Hans (Eric Gordon) a modern-day businessman down on his luck. The only thing that Hans loves more than money is his pretty daughter Maria (Tanya Reynolds) but, like every relationship in Moya’s tales, theirs is on unsafe ground.

One day Hans is visited by an inventor offering blueprints for a revolutionary engineering project. He’s an eccentric ‘foreigner’ (Jan Bivjoet) and Hans cannot resist the urge to appropriate his ideas and leave him with nothing, an act of theft that leads to disastrous consequences.

The last tale concerns Dom (Adrian Rawlins) and Rachel (Kate Dickie), a married couple with a teenage son (Jonathan Case) who one night discovers a silent intruder in their kitchen. The almost catatonic interloper is Sam (Sam Louwyck), a ghost from Rachel's past who, despite his almost complete inertia, creates anger and division in the household.

Writer-director Moya plays with his stories in fragments, and the movie’s efforts to link the characters’ lives doesn’t always come together very successfully. The individual tales never feel like they fully deliver, which is unfortunate because the concept was a promising one.

Undergods begins from a bleak basis and offer little emotional variation across its 90 minutes. The film describes itself as ‘a collection of darkly humorous, fantasy tales about ill-fated characters and doomed fortune’ but if you can find anything to smile about in these tales you must be blessed with a heightened form of gallows humour.

However, Moya has assembled a cast that can elevate the calibre of any production and are well suited to their roles. Ned Dennehy brings a quiet menace to his characters that his victims rarely see until it's too late, while few actresses have the ability to convincingly escalate from mundane indifference to full-blown frenzy like Kate Dickie. Adrian Rawlins as Dom, and Burn Gorman, as his boss, keep us guessing as to their motivations and actions.

If you’re looking for shiny sci-fi escapism, you won’t find it in Undergods. This is sci-fi for nihilists. In troubled times, here’s a film to make you think we’ve got it good. Undergods offers a grotesque and bleak message from a near-future where everything is ugly. There are no chinks of hopeful light, no compassion, no love, no serenity, no connection, everyone is exploiting everyone else, everyone is in existential despair. There are explosions of violence and people simply fall out of one hellish existence into an even more hellish one.

The painstaking production design and cinematography succeed in setting the atmosphere of despair and disintegration. The gloom is alleviated with occasional pops of colour, a yellow biohazard suit or pink overall. Add to this an eerie electronic score by Wojciech Golczewski, whose background is in horror films, and you have all you need to create a dystopian nightmare.

Technically speaking, Undergods is arresting and ambitious, but personally I won’t be in any hurry to watch it again. Compared to Moya’s vision in Undergods, Orwell’s 1984 is lively, jaunty entertainment.