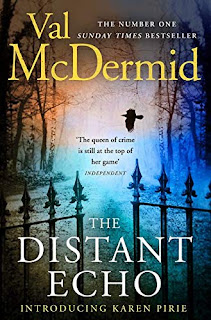 Outlander's Lauren Lyle is to star as Karen Pirie in a new ITV cold case murder drama from the producers of Line of Duty and Bodyguard and based on acclaimed author Val McDermid’s novel The Distant Echo...

True to Val McDermid’s iconic character, DS Karen Pirie is a young and fearless Scottish investigator with a quick mouth and tenacious desire for the truth.

Lauren Lyle said, “I am completely overjoyed to be bringing the formidable force that is DS Karen Pirie to life through Emer Kenny's slick adaptation. The world Emer has created using the backbone of Val McDermid's much loved books is electrifying and hooked me immediately. I couldn't ask for a more creative, supportive and energetic team to be joining. I'm so thankful to Val, Emer, World Productions and ITV for welcoming me wholeheartedly on board.”

Emer Kenny added, "I am so grateful to Val McDermid for lending me her brilliant characters, and beyond excited to work with the actors and Gareth Bryn to bring them to the screen. As I got to know Karen - and in casting the wonderful Lauren - I realised I wanted to be her best friend. So, I am delighted that I will be playing River... Karen's best friend.”

The series is based on Val McDermid’s first Karen Pirie novel The Distant Echo, and in the first episode Karen is tasked with reopening an historic murder investigation that has been the subject of a provocative true crime podcast.

When teenager Rosie Duff (Anna Russell-Martin, Casualty) was found brutally murdered in the Scottish university town of St Andrews in 1996, suspicion fell on the three drunken students who were discovered at the scene of the crime, claiming to have found her body; Sigmund ‘Ziggy’ Malkiewicz (Jhon Lumsden, Pancake) Tom ‘Weird’ Mackie (Jack Hesketh, Besa) and Alex Gilbey (Buom Tihngang, Death In Paradise). But with a lack of forensic evidence, no charges were brought and the police investigation floundered.

Twenty-five years on, someone appears to be willing to risk everything to keep the secrets surrounding the case hidden. Do the three men know more than they previously revealed? How flawed was the original investigation? And can Karen uncover the truth of what happened to Rosie that fateful night?

Val McDermid said of the adaptation “It's always exciting to see a project like Karen Pirie leave the page and head for the screen. We've been fortunate to secure a very talented and enthusiastic cast to bring The Distant Echo to life, and shooting in Scotland is definitely added eye-candy! Audiences are in for a treat.”

The novels of celebrated crime writer Val McDermid have sold over 17 million copies worldwide. The Tony Hill/Carol Jordan series of novels was adapted into Wire in the Blood starring Robson Green for ITV.