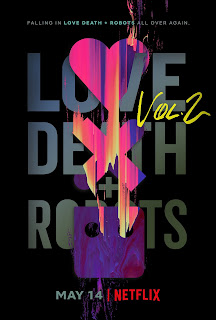 Love, Death + Robots is a blast of the future with its roots deep in the past. Show creator Tim Miller teamed up with director David Fincher after years of wanting to make adult animated features and short films at his animation house Blur Studio. When his directorial debut Deadpool hit big, they saw their opportunity and the anthology series found a natural home at Netflix. “We couldn’t have been happier at the response to the show,” recalls Miller, of the excitement around season one and the appetite for more. “It was exactly the kind of passionate reception from animation fans David and I hoped for, but for many long years had been told wouldn’t happen.” For season two Miller was joined by Jennifer Yuh Nelson as Supervising Director. The Oscar-nominated director has vast animation experience – having worked in the industry for years and helmed Kung Fu Panda 2 and 3. Together they sought talented and diverse animation directors from around the world, for a blend of styles and stories ranging from violent comedy to existential philosophy.
Here's the conversation with Jennifer Yuh Nelson and Tim Miller

Tim, what did you learn from volume one that you brought to volume two?

Miller: We learned that it was harder than we thought to wrangle all these stories and that we needed a strong team to get the job done. Jennifer was key to that effort.


Did you two know each other before this process?

Nelson: We had friends in common who suggested we chat, who knew we shared similar tastes in filmmaking. So we had lunch and talked about me possibly doing season one of LDR. I wasn’t available, but I was thinking: “That’s a dream project, to be able to go as broken and dark and messed up as possible, just let it all out.” And when the second season came around, Tim called again and said, “You know anybody that might be available?” I said, “Well... how about me?”


Was it easier with it being a second season?

Nelson: None of this is ever easy, but, the more important question is, whether it’s worth it. That’s what makes those difficult days enjoyable, because you’re doing something cool. You’re still going to get punched in the face, but it’s worth it.


So are the initial steps about finding people you don’t mind being punched in the face with, or by?

Miller: It’s hard to predict who will succeed spectacularly and who won’t and I find my “gut” wrong as often as right on that score. Sometimes the only way you can truly find out is to jump in the foxhole with them. Luckily for us Jennifer was on the “spectacular” end of the spectrum.

Nelson: I could’ve been a psycho.

Miller: But instead we won the lottery.

Nelson: I think finding people with a sense of humility about their talent is the key, because when things get challenging ego doesn’t get in the way of their ability to roll with it. 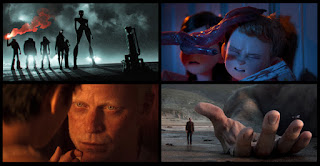 There are eight episodes in this volume – and another eight due to drop in the near future. How do the stories develop? And how do you decide on the art style?

Nelson: Tim finds all the stories. Most are stories that he’s wanted to do forever.

Miller: And I find more all the time and the team reads voraciously too. When you start looking at everything you read through the LDR lens new possibilities open up. But we approach them as stories first- style choices come later. Usually before the director is chosen, but sometimes after.

Nelson: For instance, if you want a story to be done in a 2D style, you’ll want to find a director that understands that process. Each story is different; some might be 50 pages that need to be distilled to their essence, some, like AUTOMATED CUSTOMER SERVICE are a few thousand words. They all come from different sources.


How important was it for you to have a variety of animation styles – and tones – across the season?

Nelson: Oh geez, we had so many meetings about that! Every few days the team would meet, look at the mix and say, "shit... too many of this thing, not enough of that thing.”

Miller: The conversation around comedy is particularly endless because there’s not a ton of options in that category like there are in science fiction or fantasy. So thank the fates for authors like John Scalzi who delivers that genre -and all others for that matter- in abundance.


You have things like “Life Hutch” – action sci-fi – but then “All Through The House,” which is stop motion and cheerfully creepy, it’s quite a range…

Nelson: That particular short was quite a special one. The director [Elliot Dear] is known for pushing stop motion in a hybridization process with digital techniques. It still has all the charm of stop motion, but is something more. It was wonderful to find a perfect story for his techniques.

Miller: The faces of the kids are CG composited on the stop-motion figures… which you’d never guess.


You have Michael B. Jordan in “Life Hutch” – how did that come about?

Miller: I’d met Michael a few times and knew he was a huge animation fan. So when we decided to do LIFE HUTCH I thought of him. When I pitched him on the story, he immediately said “Put me in coach!” And we were thinking about a live action/CG process that we thought would play to Michael’s strengths. 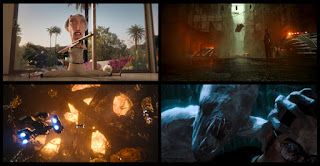 What’s the key to giving these characters soul? Like, if you look at “Pop Squad” – which you directed Jennifer – you care about that guy, even though he does terrible things…

Nelson: I knew this was going to live and die on the main character’s performance, because you have to stay with him through some horrific moments. We used facial motion capture and enhanced it further with key-frame animation. We had actors working together on the mocap stage, so they could interact and feed off each other. We wanted a subtle, realistic approach to the acting. It’s basically live action ballet.


How good is it to be able to dip into material that might be different from what people expect of you?

Nelson: Coming from animation, people always had assumptions about what I like. But they weren’t always right; my tastes are broader and darker than most expect. I think most directors who worked on this show felt the same way. These are the kinds of stories they’d always wanted to tell but never got the chance.


Is it fun to have these wild, action-filled stories and then something as melancholy like “The Drowned Giant,” the JG Ballard short story you adapted Tim?

Miller: I tried very, very hard to get this story for season one and I kept right on begging into season two pre production. Eventually Ballard’s daughters took pity on me when I showed them an illustration I’d done of the story for a fanzine in high school. “I have loved this for 40 years! Please… I promise not to screw it up.”

Nelson: There were so many times Tim would look sad, because he’d gotten rejected again. But he always shook it off with some variation of, “I’m not giving up yet.”

Miller: After watching a rough version of ‘The Drowned Giant’ followed by a particularly violent one Jen is doing for Season Three, David said, “I love that we’re doing a series where you might see a cybernetic bear biting people’s heads off, right after something like ‘The Drowned Giant.’” We all really love the contrast.


The first season of LOVE, DEATH + ROBOTS showed there was an appetite for this type of material, do you think it could lead to adult animation features?

Nelson: I hope so. I mean, how many people in the animation business are waiting for that to happen? Every animator I know wants to do adult animation. The issue was always whether there would be enough of an audience for it. And it seems, now, there are.

Miller: When we were trying to do a HEAVY METAL feature [based on the cult comic] Jim Cameron (who was going to direct one of the shorts) was at a pitch meeting and he had an analogy I thought was great. This was many years ago, so geeks hadn’t yet become so strong a demographic. There were no films like HEAVY METAL that a studio could look to as an example of success. So all the studios were hesitant to do it. Jim said, “The fans of this material are like the dark matter of the universe -we know it’s out there, we can feel its gravitational pull but we can’t see it. But if we make this, it will pull them in.” Netflix, much like the internet, allows people in all their strangeness, to connect on material they’re passionate about. Sometimes for good, sometimes not... but we all think LOVE, DEATH + ROBOTS, is a positive experience.


It’s been a long road to get here. How important, and perhaps underrated as a filmmaking skill, is being stubborn?

Miller: I would put it at the very tip of the pyramid. If I speak to students or younger artists, my number one tip is: just stay in the fucking game. If you keep trying eventually you might get your shot.

Nelson: A director’s whole job is to protect their project. If you’re not stubborn, how can you succeed? That’s kind of the job.
Find Volume 2 of LOVE, DEATH + ROBOTS on Netflix from Friday
Images & info - Netflix
Email ThisBlogThis!Share to TwitterShare to Facebook