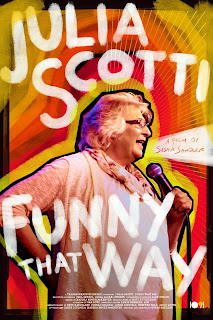 This richly funny, moving, relevant and timely documentary portrait is about the incredible transgender senior comedian Julia Scotti, beloved by America as a finalist on America's Got Talent, who returned to comedy (and Showtime) in a different gender after a 20 year hiatus.

In the comedy boom of the1980’s Rick Scotti was a busy guy - a headliner in clubs across the country-- when he came to the dawning realization that nothing felt right. At a time when the words gender dysphoria and gender reassignment surgery were rarely heard, Rick’s true awakening at age forty-seven led to a year of hormonal treatments, surgery, and a new identity as Julia Scotti.

And then everyone turned away—former wives, friends, family, comedy world buddies, and most painfully Julia was shut out from any contact with her children. She reinvented herself, spent a decade teaching, and then several years ago, stepped back on stage at an open mic and began her journey back to the world she loves. And just as she returned to comedy, her children reached out to her after 15 years of silence.

Shot over a period of five years, Julia Scotti: Funny That Way tracks Julia’s triumphant comeback, the rough life on the road, and the complex process of reuniting with her children, as comedy becomes the shared language of identity, healing, and joy.

Director Susan Sandler said, "I fell in love with Julia Scotti one July night in 2015 after seeing her explosively funny and moving comedy set. Later, huddled in a noisy bar, I began to see around the edges of the private Julia--delicate, vulnerable, and real. As we began to exchange histories an undeniable link emerged. A sisterhood. We are women of a certain age with a shared sensibility, and a willingness to say yes to truth, no matter where it takes us. Julia's story deepens our understanding of not only the transgender experience, but of the human experience of longing to be who we truly are, no matter the price. And by that example, she invites us to be free."

"Julia's life story is an important and touching one, and we are excited and honoured to support its telling through the release of Susan Sandler's wonderful film", added Carly Reicho, Director of Film Distribution at 1091 Pictures.
Image - 1091 Pictures
Order Julia Scotti: Funny That Way online here
Email ThisBlogThis!Share to TwitterShare to Facebook